Don’t judge a spud by its cover

Don’t judge a spud by its cover 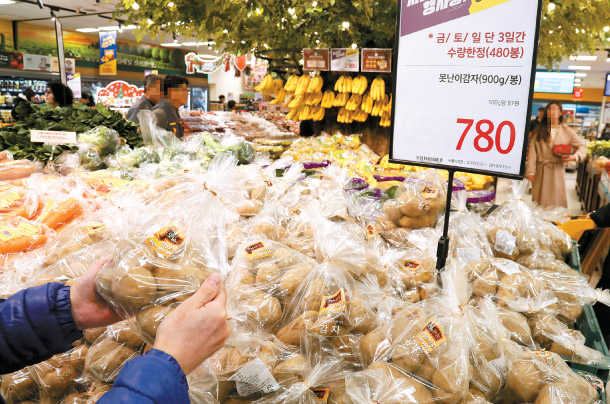 A customer rummages through so-called ugly potatoes in discount chain Emart’s Yongsan branch in central Seoul, on Friday. Shinsegae said it has purchased 30 tons of ugly potatoes that are used to make processed food instead of being sold at supermarkets’ fresh produce stands as they fail to meet retailers’ sales standards. The potatoes are being sold at Emart and Shinsegae’s online mall SSG.com from Friday through Sunday for 780 won (67 cents) for 900 grams. The sale of the ugly spuds at one of Korea’s largest retailer came following a recent TV show, during which host, restaurateur and food celebrity Baek Jong-won personally called Shinsegae Vice Chair Chung Yong-jin and asked to buy the faulty potatoes to help Gangwon farmers, saying that many of these potatoes are just being thrown away and wasted as they fail to meet even processed food manufacturers’ demands. During the phone call that aired on Friday night’s show, Chung said he would buy the potatoes and eat them himself. The vice chairman’s Instagram was then flooded with people thanking him and also promising to join the campaign to help out the local farmers.[YONHAP]