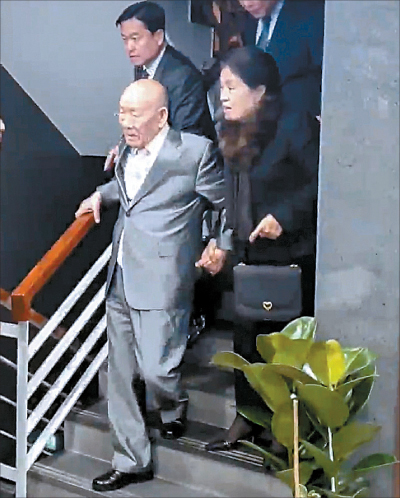 Former President Chun Doo Hwan, foreground, walks out of a restaurant where he’s said to have celebrated the 40th anniversary of his 1979 military coup with an expensive lunch on Thursday. [YONHAP]

Former President Chun Doo Hwan will not attend the upcoming session of his trial concerning the 1980 Gwangju Democratization Movement due to poor health conditions, his aide said Friday. The announcement comes amid growing public criticism after the authoritarian leader was said to have recently celebrated the anniversary of his 1979 military coup with a luxurious feast.

“Chun will not attend the session of his trial in Gwangju District Court on Monday,” Min Jeong-gi, former public affairs secretary of Chun, said in a press release. The former president is a criminal defendant in a libel trial for allegedly defaming a late Catholic priest by denying his account of the military’s bloody crackdown on democracy protesters in Gwangju in 1980. Chun, who rose to power in a military coup on Dec. 12, 1979, was the country’s president from 1980 to 1988.

“In a criminal trial, a defendant’s appearance in a courtroom is to exercise his right for defense,” Min said. “If the accused does not do so, no matter for what reason, it means he is giving up his defense right. Chun has decided to give up the opportunity and delegated it to his lawyer because his current mental state prevents him from making a normal, meaningful testimony, although he is physically capable to sit inside the courtroom.”

According to Min, Chun is suffering from Alzheimer’s disease, and although his condition is not extremely serious, he is unable to maintain a normal life without his wife’s help.

The trial began in March at the Gwangju District Court. Chun was charged with libeling the late Father Cho Pius, a key witness of the Gwangju uprising of May 18 to 27, 1980, which called for democracy and an end to Chun’s junta. Cho, a religious leader and democracy activist who died in 2016, testified that the military had opened fire on protesters from helicopters during the crackdown.

Chun published a memoir in April 2017 largely defending his authoritarian presidency. Chun called Father Cho a “shameless liar who does not deserve the title of a religious priest” and “Satan wearing a mask” in his book.

Within days of publication, the family of the late priest filed a petition to the prosecution accusing Chun of defaming the dead, which is a crime in Korea. Chun was indicted by Gwangju prosecutors in 2018.

Chun attended the first session of the trial on March 11 at the Gwangju District Court and denied all charges. In April, Chun asked the court to proceed with the trial in his absence, and the court allowed it. He has not attended any follow-up sessions since then.

The former authoritarian leader has faced snowballing public criticism over recent weeks after a video was made public showing him playing golf at a country club in Hongcheon County, Gangwon, on Nov. 7. Justice Party Vice Chairman Lim Han-sol took the video and offered it to the media.

Public rage reached a new peak this week after it was revealed that Chun had enjoyed a luxurious lunch at a restaurant in Gangnam District, southern Seoul, with his former aides on Thursday, the anniversary of his Dec. 12, 1979 military coup. According to Lim of the Justice Party, members who attended the lunch were former military leaders who assisted Chun during the coup.

Choi Se-chang, former chairman of the Joint Chiefs of Staff, and Chung Ho-yong, former chief commander of the special forces, attended the luncheon with their spouses, Lim said.

Following Lim’s revelation, leaders of the ruling Democratic Party (DP) condemned Chun, urging him to attend his trial in Gwangju and pay an outstanding fine of 103 billion won ($87.9 million), which he is refusing to pay. “I don’t think he understands what is wrong with his actions,” said Rep. Park Ju-min, a member of the DP’s Supreme Council. “He must be sternly punished. The Liberty Korea Party must cooperate to operate a committee inside the National Assembly to go after him.”