Politicians and business leaders paid tribute to former LG Group Chairman Koo Cha-kyung, who drove the conglomerate’s rapid growth and inspired it to achieve a number of significant breakthroughs.

Koo, who led the LG Group from 1970 to 1995 as its second chairman, passed away 10 a.m. Saturday at the age of 94 from a chronic ailment, the conglomerate said in a statement. During his 25 years of leadership, Koo grew the group from 26 billion won ($22 million) in sales per year to more than 30 trillion won per year, LG Group said. 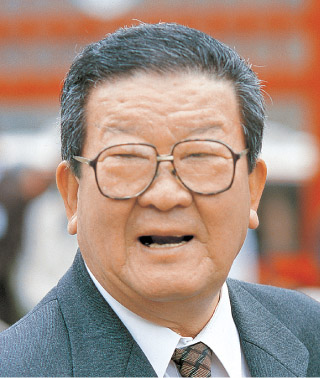 Born in 1925, the former LG Group chairman drove innovation at the conglomerate, directing the establishment of more than 70 research centers. After Koo took the helm of the group following the death of Koo In-hwoi, his father and LG founder, the chaebol spearheaded the growth of Korea’s chemical and electronics industries. It introduced Korea’s first 19-inch color TVs, air-cooled air conditioners, electronic videocassette recorders and slim-sized refrigerators.

Koo Cha-kyung is the grandfather of Koo Kwang-mo, LG Group’s current chairman. By the time Koo Cha-kyung stepped down and handed over leadership to his eldest son and late Chairman Koo Bon-moo, who died in May this year, LG Group was Korea’s third-largest conglomerate, with more than 30 affiliates.

“[Koo] created a foundation for Korea’s chemical and electronic industries while shining a light for this country’s companies to move towards with honest management and collaborative co-growth,” said Blue House Policy Chief Kim Sang-jo who arrived at the funeral around 11 a.m. Sunday. “President Moon Jae-in said ‘I hope he rests in peace’ and sent condolences to his family members.”

Former GS Group Chairman and Federation of Korean Industries (FKI) Chairman Huh Chang-soo, who served as an executive at LG Group in the past, spent around an hour at the funeral at 10 a.m. Sunday.

Huh served as a vice president for LG Chem in 1989, when Koo served as chairman of Lucky Kumsung, the former name of LG Group.

GS Group split from LG Group in 2005, with the Koo family fully controlling LG Group and the Huh family creating GS Holdings, the holding company for the conglomerate.

“Even at the time when research and development wasn’t a popular direction, [Koo] never spared expense in investing in innovative technologies expecting an area where technological superiority surpassing everything,” Huh said in a statement on behalf of the FKI. “I remember him saying we should move past traditional practices and go for technological innovation with a total customer-centric focus.”