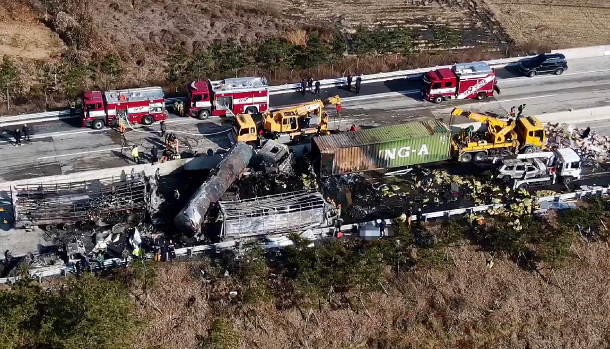 Policemen and firefighters deal with piled-up vehicles on a highway in Gunwi County, North Gyeongsang, in the early morning hours on Saturday. Seven died and 32 were injured in multiple accidents caused by so-called black ice on the Sangju-Yeongcheon highway early Saturday. According to the police and firefighters, about 20 vehicles rear-ended each other in a chain collision on the Sangju-bound lane of the highway at 4:41 a.m. on Saturday. The pile-up caused six deaths and 14 injuries. Eight vehicles caught on fire, and it took two hours for firefighters to extinguish the fire. Around the same time, about 20 vehicles rear-ended each other in the Yeongcheon-bound lane, just 2 kilometers (1.2 miles) away from the earlier accident. One died and 18 were injured in that accident.

Black ice is a phenomenon in which ice forms on the surface of a road but looks black. Drivers cannot easily discern black ice before finding themselves on it.

Traffic experts recommend drivers to slow down in freezing weather and maintain safe distances from vehicles in front of them, especially in the winter season. [YONHAP]