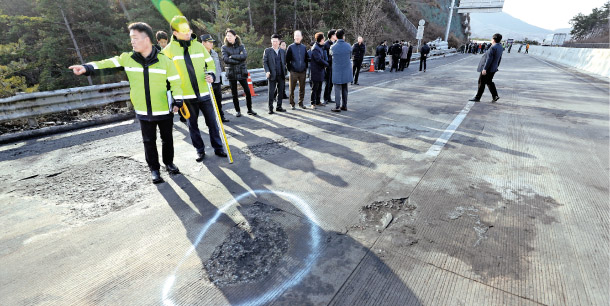 A team of police officers and road safety experts from the government on Monday inspect the area where two deadly pileups took place that caused seven deaths and 32 injuries on Saturday morning on a highway in Gunwi County, North Gyeongsang, to determine the cause of the traffic accidents. [YONHAP]

A team of police officers and road safety experts from the government descended on a highway in Gunwi County, North Gyeongsang, Monday for an inspection of the area where two deadly pileups took place on Saturday morning, which caused seven deaths and 32 injuries.

A spokesperson for the Gunwi Police Precinct said 23 officers from the precinct and several other officials from the Korea Expressway Corporation and the Korea Transport Safety Authority have teamed up to form a joint investigation team to look into the fatal accidents.

Members of the team launched their probe Sunday and visited the scene for the first time Monday, the police spokesperson continued.

The team will be primarily tasked with finding out the causes of the two accidents and whether the manager of the highway carried out necessary safety measures in advance. The black boxes of some 40 vehicles are set to be scrutinized for the investigation, as well as CCTV footage from the area.

Local authorities said they believe “black ice” was the main cause of the crashes but would also check whether anything else could be behind the high death toll and number of injuries, such as defects in vehicles.

Black ice is a phenomenon in which ice forms on the surface of a road but looks black, making it difficult for drivers to identify. Gunwi County had seen a drizzle early Saturday morning before the pileups, causing a thin layer of ice to form on the roads.

Eight cars caught on fire, and the blaze was entirely extinguished about three hours later at 7:44 a.m. The bodies were recovered at around 11 a.m.

The second accident occurred at 4:48 a.m. on the Yeongcheon County-bound lane, only about 4 kilometers away from where the first accident occurred. A total of 22 vehicles rear-ended each other, leading to one death and 18 injuries.

The dead and injured passengers were sent to at least 10 different hospitals nearby for medical treatment.

In both cases, police and firefighters believe the cars that initially lost control hit black ice and subsequently caused the vehicles behind them to jam on their brakes and ram into each other.

Public agencies announced Monday that they would carry out an all-out investigation to check the highway sections that were designated by the government to be areas vulnerable to black ice and see whether any other sections in the country were missing from the list. The Korea Transport Safety Authority, Korea Expressway Corporation, Korea Institute of Civil Engineering and Building Technology and other relevant state-backed organizations were expected to hold a meeting in Seoul soon to discuss the issue.