‘I am an artist, not a painter.’: Zhang Xiaogang tells stories of East Asia in his latest collaboration

‘I am an artist, not a painter.’: Zhang Xiaogang tells stories of East Asia in his latest collaboration 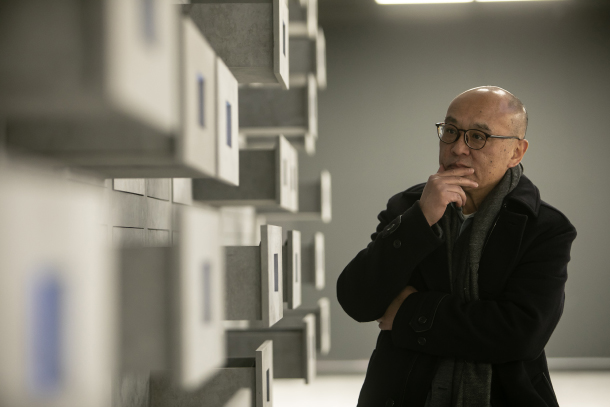 He may be one of China’s most celebrated contemporary artists, but for Zhang Xiaogang, each day in the studio is just another day of creative work - and pushing the boundaries of art. He surprised art lovers when he presented his first three-dimensional work in 2013, but with his latest work “Station,” which sits in JoongAng Group’s new building in Sangam-dong, western Seoul, he’s moved on to yet another dimension - the digital one.

Born in 1958 in Yunnan Province, which borders Vietnam, Laos and Burma, Zhang has been one of China’s leading figures in the art world since the late 1980s, after he participated in the “China/Avant-Garde” exhibition at the National Art Museum of China in 1989. Soon after his work appeared at the Venice Biennale in 1995, he became an international star.

His “Big Family” series was an awakening to Chinese society through the deadpan gaze of his characters’ eyes, which reflected both China’s turbulent modern history and the Chinese obsession with family and bloodlines. But mostly, he was regarded as an icon of Chinese contemporary art who really thought about what it meant to be a “Chinese artist” in the international art scene. He set a record as the highest-selling contemporary artist in 2011 when his triptych “Forever Lasting Love” (1988) sold for over $10.3 million. That record was later broken by his own work, “Bloodline: Big Family No. 3” (1995) which sold for $12.1 million in 2015.

For “Station,” artists of Korea, China and Japan have joined forces for a public art project, that was created as a symbol of harmony between the three countries. Zhang collaborated with Korean artists Moon Kyung-won and Jeon Joon-ho and curator Seo Jin-seuk, Japanese artist Yanagi Yukinori and curator Kubota Kenzi and his own curator, Leng Lin. Different from his usual paintings of people and their families, the families in “Station” are images and videos displayed on a wall shaped like a gigantic concrete drawer with its shelves pulled out. The concrete wall stands along a ball hanging from the ceiling made by Yukinori, with background lights and music made by the Korean team.

“I was attracted by the fact that it was a project where artists from Korea, China and Japan worked together,” Zhang said. “It was a challenge for me to work together with the other artists because it was something I hadn’t done before. I had a lot of fun along the way […] I was worried whether all of our works could fit together because we’re all so different and we speak different languages, but when I saw it installed together, they seemed to be in perfect harmony.”

Zhang sat for a joint interview with the Korea JoongAng Daily and the JoongAng Ilbo when he visited Korea earlier this month to put the final touches on “Station,” and he talked about the thinking that went into the piece and about being one of China’s most famous artists. The following are edited excerpts from the discussion. 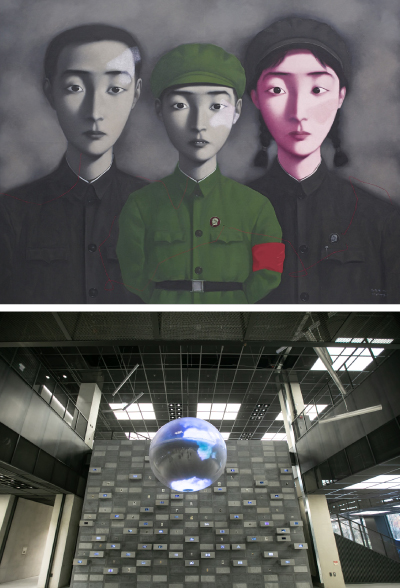 Q. The project is titled “Station.” What is the meaning of that?

A. The word station is an interesting one in itself, I think. It’s the word that I think of when I think back to when I first traveled out into the world after the Cultural Revolution in China. Back then, it gave me the chance to look back at my own past. But now that I think of it, I was still in the midst of a historical process. “Station” carries all of that - it’s a record of things from the past, a witness of history but also a chance to think about what happens in the future.

The drawers are a symbol of that. The drawers carry a record of time. Korea, China and Japan all have painful history. I’m saying, “Let’s look back at that,” but I also used the images of children in the piece to symbolize how we can move forward into the future. It’s mostly a piece about the past, but with room to think about the future.

Why do you focus on the idea of memories?

I don’t think I would have focused on the meaning of memories if life didn’t change. What’s important is the emotion. The reason I focus on memories isn’t because I want to recover the past, but because I want to study deeper into the process of change. I want to talk about what’s being forgotten in our minds and what that time has left us.

It’s interesting to see a digital work instead of a painting. You also presented your first bust sculptures in 2013. Are you trying to move onto different mediums?

Around 10 years ago, I started to experiment with various mediums other than oil [paintings]. And within that process, I’ve tried working with digital videos, like filming myself while I paint. I’ve worked with things about texts or created sculptures [and] even stainless steel. There were some works that I presented in 2009 for an exhibition using cement as well.

You mentioned in the past that your famed “Bloodline” series is about how China is like one big family, where the individuals exist only as a part of the bigger community. Is this work still in the same context as that?

Every work I make is about the same context. I focus on the essence of people, and it’s usually about what happened to me in China, the things I go through in my everyday life, my parents and so on. This work does touch on something broader, because it carries the history and concerns of Korea, China and Japan. The material and the way I express it is also broader, but the context is mostly the same.

For the pictures of the children, I used photographs of children from the three countries from the 1930s and the 1970s - two very particular times in history. It’s ultimately about looking into the innermost side of human beings.

Why did you start expanding the mediums you use in your works?

I still mostly paint, and I like oil paint. But I believe that a contemporary artist should not be limiting themselves to one certain area of art. I like to paint, but I have never thought of myself as just a painter. I am an artist, not a painter. If there is a different medium that better expresses what I want to say, then it’s only right that I use that medium.

Society has changed a lot since 30 years ago when you first started working as an artist. Have the things that you care about changed too?

On the point that art itself is my life, nothing has changed. I pulled through the hardest parts of my life because of the fact that I could paint, and it feels like a vocation for me, the older I get. It’s definitely not an easy road to take, but the fact that I can pursue it is a blessing enough.

Your works broke auction records in 2011 and 2015. What is it like living as a successful artist?

It’s true that the fact that my works sold at a higher price affected my life - my lifestyle, my friends and the environment. But change is instant. The fact that I work and create is just the same, like the way I eat my meals everyday.