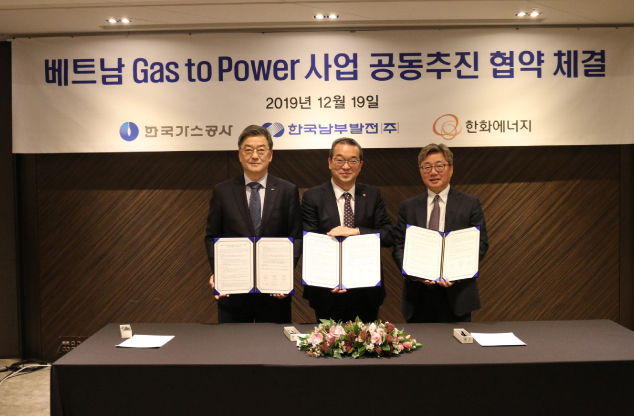 Hanwha Energy entered into an agreement on Thursday with state-run companies to jointly build gas plants and a liquefied natural gas (LNG) terminal in Vietnam.

The energy company said that it signed a memorandum of understanding with Korea Gas Corporation and Korea Southern Power to collaborate on the LNG project, a move that Hanwha will use as a springboard to enter the Southeast Asian country.

“It is a large-scale project with the aim of establishing the infrastructure necessary for building and operating gas plants, after constructing an import terminal for supplying LNG at competitive prices,” the company said in a statement.

The three corporations have formed a consortium to participate in the project.

It cited Vietnam’s unstable supply of power, which could translate into an opportunity for the company.

The electricity generation capacity of the power plants in southern region, for instance, stood at 37 percent of the total power capacity installed in the country.

Against this backdrop, LNG-based power generation emerged as an ideal option.

“The need for LNG power plants is on the rise in Vietnam because constructing power plants operating with other power sources, such as hydropower, coal, or nuclear energy, does not seem to be promising due to environmental and economic restraints,” Hanwha said in a statement.

Jung In-sub, CEO of Hanwha Energy, hailed the agreement to pull together each company’s strengths.

“Considering that the energy industry leaders in Korea are collaborating in entering the global market by establishing a ‘Korea Consortium’ based on their expertise in the field and building a foundation of cooperation, the agreement we made this time is highly symbolic,” he said.

“We are determined to achieve a concrete outcome through an organic collaboration.”