In ‘Mr. Zoo,’ the animals are the ones doing the talking

In ‘Mr. Zoo,’ the animals are the ones doing the talking 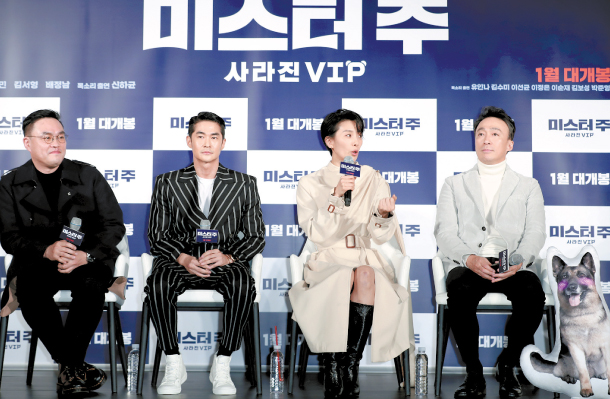 What would you do if one day you could communicate with animals?

Director Kim Tae-yun brings every animal lovers’ fantasy to life in the upcoming film “Mr. Zoo,” when the elite National Intelligence Service agent Zoo Tae-joo (played by Lee Sung-min) acquires this power after he hits his head while working to protect a VIP.

Unlike his fellow castmates Kim Seo-hyung and Bae Jung-nam, who have their own pets, Lee confided that he was initially afraid of animals.

“But when I read over the script, I grew interested because of its fresh story,” Lee said at a press conference held at the Dongdaemun branch of Megabox in central Seoul on Thursday. “The second reason why I wanted to be a part of this film is because of director Kim Tae-yun. I became very curious to find out how he would direct this film because of his previous works. I couldn’t quite match the film to Kim’s directing style, but I had faith in him.”

Director Kim had previously focused on telling moving stories about the contemporary social problems in films like “Another Family” (2012) and “New Trial” (2017).

“Since I became so used to creating films that may be [a bit heavy] with social messages, I think I forgot how fun the film-producing experience is. I made this film because I wanted to remind myself of those fun moments,” the director said.

In the film, Lee works closely with a shepherd dog named Ali, who is the character Zoo’s most trusted companion.

“At first, I didn’t even know how to touch him, but I made sure that I’d spent enough time interacting with Ali before we started shooting,” said Lee. “The film, in a way, is a buddy movie between me and Ali. I actually miss him a lot now.”

“It was amazing to see how Lee changed while shooting this film,” Kim Seo-hyung said. Kim plays Lee’s charismatic but somewhat awkward boss. “Every time I saw Lee, he seemed to have grown closer and more comfortable around Ali [and other animals]. In fact, he became so friendly towards animals that Bae and I even encouraged him to adopt his own pet.”

“It was an interesting experience as well because it was my first time to work with animals and with CGI [computer generated imagery],” Lee added. “We have arrived at an era where actors need to be flexible working with advanced technology, and I took special care [to become natural at it]. It was definitely entertaining and a new kind of experience for me.”

Ali’s voice is provided by actor Shin Ha-kyun, and the movie’s other animal voices are played by veteran actors and entertainers as well, such as Yoo In-na, Park Jun-hyung, Lee Jung-eun, Lee Sun-kyun and Lee Sun-jae. The director said that matching the celebrities’ voices to the animals is another entertaining part of the film that moviegoers can look forward to.

The local film is likely to be compared to the upcoming Hollywood film “Dolittle,” which premieres next month. The fantasy blockbuster stars Robert Downey Jr. as Doctor Dolittle, who can also speak to animals.

“It would be a lie to say that I’m not concerned at all about that film,” the director said. “But since both are animal-friendly films, I would like to see the two films as companion movies rather than rivals. If audiences enjoy ‘Dolittle’ they will definitely enjoy our film too.”