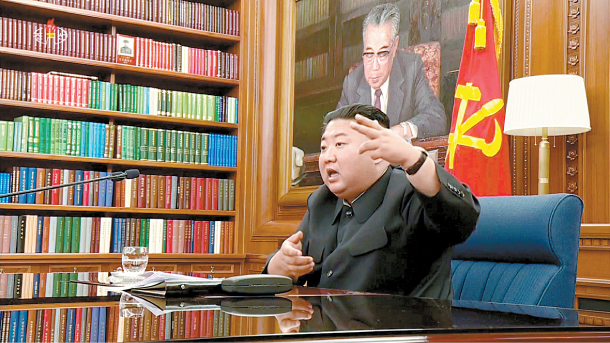 North Korean leader Kim Jong-un convened a meeting of the country’s Central Military Commission on Sunday to decide on “important organizational and political measures” ahead of Pyongyang’s self-imposed year-end deadline for negotiations with the United States.

According to an English language report from the state-run Korean Central News Agency (KCNA), Kim gave a briefing on the “complicated internal and external situation” the country faced as the meeting went into discussions on structural measures to be taken to strengthen the North’s ruling Workers’ Party’s control over the armed forces.

Also notably deliberated at the meeting were “core matters for the sustained and accelerated development of military capability for self-defence,” possibly referring to the regime’s recent efforts to test presumed rocket engines possibly intended for a long-range missile.

With immense uncertainty looming over what course the North will take at the year’s end, the contents of the meeting convey a relatively subdued message from Pyongyang in contrast to the string of harshly-worded warnings laid out in earlier weeks, which said a “Christmas gift” was in store for Washington if it continued to retain a “hostile policy.”

Convening a meeting of the Central Military Commission, which oversees the country’s military and defense spending, could mean, however, that Pyongyang intends to continue building on its conventional defense arsenal, such as with deployments of new weaponry tested throughout this year.

The decisions to organize, expand and “rectify” different organizations within the military “in conformity with the Party’s military and strategic intention” suggest Kim is trying to shore up his authority over the country’s armed forces.

The meeting also precedes an expected plenary session of the Central Committee of the Workers’ Party due within the month where a policy shift announcement of some sort is likely to emerge in line with Kim’s threat of pursuing a “new path” if negotiations falter.

It is widely believed that Kim may use the occasion to announce a pivot in his policy toward the United States to coincide with the year-end deadline, which could be a declaration by the dictator that official dialogue with the United States has ended or that it will lift a moratorium on nuclear and long-range missile tests.

Amid these ominous signs, Washington maintains its original stance regarding the North’s denuclearization, showing little indication it will address Pyongyang’s desire for sanctions relief while propping up its alertness with regard to a possible provocation.

Gen. Mark Milley, the chairman of the U.S. Joint Chiefs of Staff, told reporters at a press conference at the Pentagon on Friday that the United States was “prepared for whatever” actions North Korea could take, likely in reference to a possible intercontinental ballistic missile launch. U.S. Defense Secretary Mark Esper chimed in, saying he was hopeful that diplomacy could resume but that the United States was ready to “fight tonight” if need be.

Of these public remarks by U.S. officials, the comments made by Robert Destro, the U.S. assistant secretary of state for democracy, human rights and labor, concerning North Korea’s human rights situation in an interview with the Voice of America Thursday provoked a strong response from Pyongyang on Saturday.

Speaking to KCNA, a spokesperson for the North’s Foreign Ministry condemned Destro’s comments as a “grave political provocation” that was “further aggravating the already tense situation” on the Korean Peninsula akin to “pouring oil over burning fire.”