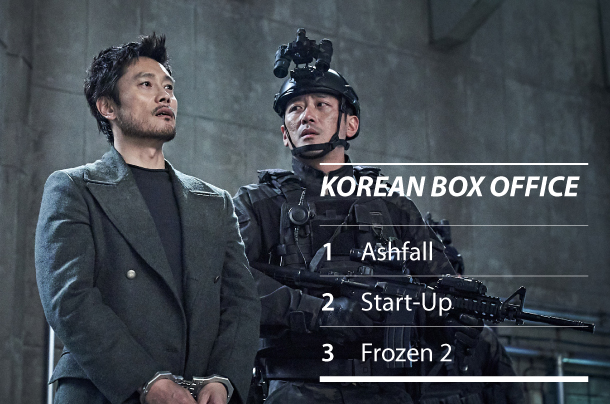 “Ashfall” shoots to No. 1 during its debut weekend, knocking “Frozen 2” from its throne atop the local box office after a monthlong reign. [CJ ENTERTAINMENT]

“Frozen 2” ended its monthlong reign of the box office and was leapfrogged by local films “Ashfall” and “Start-Up” over the weekend.

“Ashfall” climbed to the top of the box office with two million moviegoers seeing the blockbuster over the weekend at a total of 1,971 screens. The film raises the question of what would happen if one day the dormant Mount Paektu explodes again. Korean EOD lieutenant Jo In-chang (played by Ha Jung-woo) must lead his team to the impending volcano and set up a nuclear bomb that would deter the explosion, ultimately saving the Korean Peninsula. However, he needs to work with double agent Lee Jun-pyung (played by Lee Byung-hun) who seems to have other reasons for working with Jo. Whether or not the duo can save the peninsula depends on their teamwork.

“Start-Up” came in second over the weekend, selling 718,000 tickets at 1,102 screenings. Starring Ma Dong-seok, Park Jung-min and Jung Hae-in, the film centers around Taek-il and Sang-pil (played by Park and Jung), who have to face the responsibilities of becoming adults while working for their boss and mentor Geo-seok, a mysterious cook who runs a Chinese restaurant.

“Frozen 2” dropped down to third but still managed to sell 349,000 tickets through 855 screenings. The animated film has now sold a total of 12.7 million tickets at the local box office as of this weekend.

Local animated film “The Haunted House: Sky Goblin, The Great Jormungandr” ranked fourth after it sold 290,000 tickets through 841 screenings. In the film, siblings Hari and Duri are off on a winter vacation when they discover an unconscious sky goblin named Jubi on an airplane wing. They call upon their friends, goblins Shinbi and Geumbi, to help them save Jubi, but when they do, a legendary monster named Jormungandr wakes from its slumber in the deepest part of the ocean to pray upon the sky goblin and rest of its race.

This week, the musical film “Cats” featuring a star-studded cast of big-name Hollywood actors and singers will arrive in local theaters on Christmas Eve, and another historical drama “Forbidden Dream,” about the friendship between King Sejong the Great and revolutionary scientist Jang Yeong-sil (played by Han Seok-kyu and Choi Min-sik), will also hit theaters to compete for audiences against “Ashfall” and “Start-Up.”