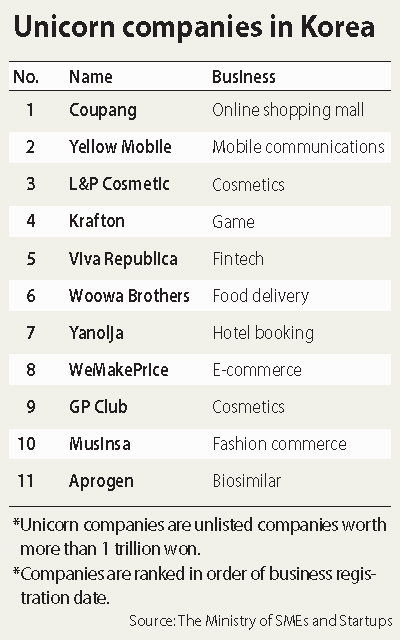 Start-ups are shunning initial public offerings (IPO) in the domestic stock market due to unfavorable conditions, although the threshold for IPOs is lower than before.

Woowa Brothers, operator of the Baedal Minjok food delivery app, once considered listing on Kosdaq, but it delayed the decision and eventually sold itself to Delivery Hero (DH) for 4.75 trillion won ($4 billion). The move was seen as an indirect tapping of the Frankfurt market.

“As the founder of the company, it’s unfortunate that I couldn’t list the company by myself and that the company went public in Germany,” said Kim Bong-jin, CEO of Woowa Brothers, in a company notice last Friday.

A Seoul-based start-up that operated Yeogi-eottae, an accommodation booking app, delayed its IPO and then sold itself to Luxembourg’s CVC Capital Partners for 300 billion won.

Unicorns are opting for IPOs on foreign stock markets or mergers with foreign companies. Reports suggest that Coupang is considering a Nasdaq listing, while Yanolja may also list overseas.

The financial investment industry is concerned about the unicorn exodus, with some in the business saying that Market Kurly, the fresh-food delivery company, and Jikbang, a real estate platform, could follow suit.

The threshold for IPOs has been lowered significantly.

In 2017, the Korean government developed the so-called “Tesla standard,” which would allow quality companies to list even if they are not yet profitable.

In Korea, valuations upon listing tend to be lower than if the companies were acquired or listed on a foreign exchange. Woowa Brothers probably would have raised far less if it had sold stock to the public in Korea. The local stock market is also exposed to hot money flows, which have the potential to increase volatility, while the indexes have been rising slowly.

“Values of unlisted companies are set by future prospects, but in the IPO market, where current performance comes first, companies are valued less than they were before IPO,” said Jang Il-hoon, head of policy research at Korean Venture Capital Association.

There is also a notion shared by companies that the priority is to grow the business by securing funds through channels such as venture capital (VC) and make bold investments rather than to go public. In other words, the domestic stock market lacks the right incentives.

“A lot of unicorn companies opt for expansion rather than IPOs to increase market share and gain the initiative in the market,” said Lee Bu-yeon, head of the innovative growth support team at the Korean Exchange.

In the absence of systems for protecting the interests of founders, such as a second class of stock, they prefer not to list. Woowa Brothers CEO Kim Bong-jin has called for such a system in the past.

The Commercial Code only allows one vote per share and does not allow systems in which certain shareholders have disproportional voting power.

The Korean government attempted to revise the law to allow a dual-class stock system for unlisted venture businesses, but the revision is currently adrift in the National Assembly.

Experts point out that due to the structural problems of the capital markets, making the domestic stock market systematically more attractive would have it limits.

“Revising the Commercial Code for improving corporate governance, such as introducing a dual-class stock structure, would be at least helpful,” said Park Chang-gyun, senior fellow at the Korea Capital Market Institute.