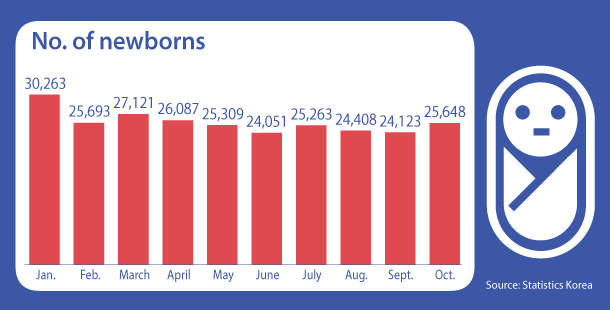 Natural population growth hit 0.0 percent in October, the first flat reading ever in that month.

The number of newborns grew slightly from September, but it was down on year, exacerbating concerns about the country’s shrinking population.

Births have been declining on year for 43 consecutive months, since April 2016, the longest stretch ever.

With the decline in the number of births, the government’s target of 309,000 newborns by the end of the year might not be reached, as it would require 51,034 births in the last two months of the year.

Equally concerning has been the increasing number of deaths.

The number of people who passed away in October totaled 25,520, which is a 2 percent increase year-on-year, or 510 more than the same month the previous year. It is the highest such number since the 27,339 recorded in January.

As a result, the difference between the newborns total and the number of people who died was 128.

“That’s the smallest natural population increase in Octobers since related data has been complied,” said Kim Jin, director of population census at Statistics Korea. She added that the fall in births combined with the rise in deaths could lead to a fall in the population.

The relevant data have been compiled since 1983.

This is not uncommon in December, as cold weather increases the chance of deaths.

The fall in October was the first ever recorded for that month.

The government last week in announcing its economic plan for next year once again emphasized growing concerns about demographics, adding that it will come up with measures that will include comprehensive government support not only for housing but also for childbirth and the raising of children in an effort to increase birthrates.

Since 2006, the Korean government has spent 152.9 trillion won ($132 billion) to raise the birthrate, but with little success. Over the last three years, the budget for these efforts has been rising around 3 trillion won annually.

When announcing next year’s growth forecast of 2.4 percent, the government forecast new jobs at 250,000 from this year’s 280,000, citing a shrinking working-age population.