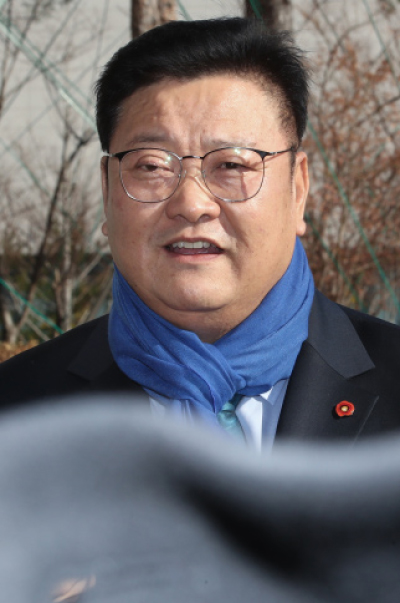 Prosecutors confirmed Thursday that Lim Dong-ho, a former senior member of the Democratic Party (DP) and a key witness in the probe into allegations that the Blue House meddled in the 2018 Ulsan mayoral election, left the country on the day his house was raided.

On Tuesday, the Seoul Central District Prosecutors’ Office conducted a raid on Lim’s residence in Ulsan and his car, as well as on several units of the Ulsan Metropolitan Police Agency amid an investigation into possible meddling in last year’s mayoral election.

Lim, 51, who was the current Ulsan Mayor Song Cheol-ho’s rival in the primary race for the 2018 elections, was belatedly confirmed to have traveled overseas on the same day as the raid, leading to speculation that he had fled or had even been spirited away by the DP.

However, Lim was confirmed to have traveled by boat to Fukuoka, Japan, late afternoon Tuesday, and is currently staying at his Osaka, Japan, residence.

Prosecutors have been looking into an allegation that the Blue House triggered a police investigation of former Ulsan Mayor Kim Gi-hyeon and his aides on accusations of corruption before Kim ran for a second term in the June 2018 local elections.

Kim, backed by the main opposition Liberty Korea Party (LKP), ultimately lost to Song, the candidate of the DP and longtime confidant of President Moon Jae-in. The Blue House has rejected allegations of election meddling.

Lim, a former member of the DP’s Supreme Council, initially declared he would run in the Ulsan mayoral race in February last year, but Song ended up being the sole DP candidate.

Prosecutors are investigating whether Blue House officials meddled in the 2018 election by offering Lim another post in order to dissuade him from running in the primary for the Ulsan mayoral race.

Earlier this month, Lim told media that Blue House officials offered him the post of consul general in Kobe, Japan, so he would drop out of running in the Ulsan mayoral race.

Lim said that at that time he had requested for the post of consul general in Osaka, a familiar location to him, but had been offered Kobe, which he rejected. Lim had been educated in Osaka and has been an advocate for the concerns of the Korean-Japanese community there.

Lim later clarified that he had not been offered an official proposal from the Blue House in exchange for dropping out of the mayoral race.

Instead, Lim said he had discussed the matter casually over drinks with Im Jong-seok, then-presidential chief of staff, who he has been friendly with. He said Han Byung-do, a former presidential secretary for political affairs, and South Gyeongsang Governor Kim Kyoung-soo had also been present.

Lim is likewise said to have told prosecutors during questioning that he misspoke in his interview with media.

He told prosecutors on Dec. 19 on his second summoning that he met with Im, Han and Governor Kim in early July 2017 and discussed his hopes for the Osaka consul general position but that he had “not been made an offer on the condition of not running in the primary race.”

Instead, he said he had only “naturally” suggested where he might be posted after his term as a DP Supreme Council member ended.

But prosecutors have seized a personal notebook belonging to Song Byung-gi, Ulsan’s vice mayor for economic affairs and the alleged source who gave a tip-off to a Blue House official accusing former Mayor Kim’s aides of corruption in October 2017, which has memos describing that Song Cheol-ho may be “disadvantaged” to Lim in a party primary.

Lim has also been accused of attending a closed-door DP Supreme Council around October 2017 and bringing up the allegations of corruption against Mayor Kim Gi-hyeon’s aides and being involved in coming up with documents related to such allegations.

Kim’s aides were later cleared of the corruption allegations.

A Seoul prosecutor said Thursday that Lim is a witness, not a suspect, so they have not banned him from leaving the country but will review follow-up measures based on his return schedule and various factors.

Lim’s aide told the JoongAng Ilbo over the phone Thursday that Lim has a house in Osaka and was meeting with his close acquaintances there while mulling over his next steps.

He is expected to return to Korea on Saturday.

Lim told Yonhap News on Thursday that he had no intention of evading the prosecution’s investigation and had been scheduled to attend a year-end gathering in Osaka.

He also added that he is “seriously considering” leaving the DP and running as an independent candidate in next year’s general elections.