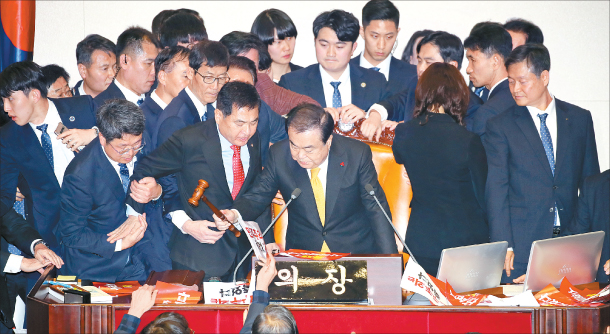 Assembly Speaker Moon Hee-sang, center, bangs the gavel to announce that the National Assembly approved the election revision bill on Friday. Moon made his way to his seat despite a physical blockage by the main opposition Liberty Korea Party lawmakers. [YONHAP]

The National Assembly on Friday passed a bill for a new election system for the April general election, despite the main opposition party’s physical blockade.

A bill to revise the Public Official Election Act, proposed by Rep. Kim Kwan-young of the Bareunmirae Party, was passed shortly after National Assembly Speaker Moon Hee-sang announced the opening of the voting session Friday evening.

Of the 167 lawmakers who participated in the voting, 156 supported, 10 opposed and one abstained. The ruling Democratic Party (DP) lawmakers and its allies cast votes and endorsed the new election system.

A plenary session was originally scheduled to open at 3 p.m., but lawmakers of the main opposition Liberty Korea Party (LKP) staged a protest inside the main hall of the National Assembly, effectively delaying the voting. After more than two hours of delay, Speaker Moon invoked his power to maintain order inside the legislature. While the LKP lawmakers resisted by shouting a slogan, “Step down Moon Hee-sang,” the speaker managed to sit in his seat and declared the opening of a session around 5:30 p.m.

According to the revised election law, the number of single-member constituency seats and proportional representation (PR) seats in the 300-member legislature remain the same at 253 and 47 for the April general election.

Of the 47 PR seats, 30 are to be apportioned using a new calculation method in which parties that fail to win enough constituency seats that correspond to their nationwide support margin could be compensated with PR seats. Smaller parties would thus be more likely to expand their seat share in the National Assembly, while the two major parties - the DP and LKP - will likely gain fewer proportional representatives.

Earlier in the morning, National Assembly Speaker Moon and floor leaders of the three largest parties - the DP, LKP and Bareunmirae Party - agreed to hold a plenary session at 3 p.m. The election law revision bill and a series of bills linked to the government’s spending plan for next year were to be voted on.

But at around 2:55 p.m., about 30 LKP lawmakers entered the main hall of the legislature and created a human chain to surround the speaker’s seat and podium. “We are doing this to block illegality,” said Rep. Kim Tae-heum of the LKP.

The LKP lawmakers complained about the operation of the legislature saying that a motion to schedule an extraordinary session must be voted on as the first item of the plenary session, but the voting schedule showed that the election law revision bill was listed as the first item.

LKP lawmakers including floor leader Rep. Shim Jae-cheol, visited Speaker Moon’s office to protest the voting plan, but Moon’s aides blocked them. “The wrongful operation of the legislature must not be tolerated any longer,” Shim said. “We should at least respect the existing rules.”

As the LKP lawmakers protested the voting schedule, the plenary session was delayed for hours but finally opened at 5:30 p.m.

The DP and its allies also passed Friday a bill to hold the current extraordinary session until Saturday. The LKP, therefore, will have time to filibuster another contentious bill on creating a new investigation agency for senior public servants until the end of Saturday.

The DP and its allies are expected to vote on the bill next week. As of now, the DP and its legislative allies secured far more than the majority vote of 148. The LKP has 108 lawmakers in the 295-member Assembly.

As DP lawmakers prepared to ram through the contentious bill, the LKP said it would resort to a rare option of convening all lawmakers for a deliberation in order to delay the voting on the new investigation agency bill.

“We will demand a Whole House Committee meeting based on the National Assembly Act,” said Rep. Shim, LKP floor leader, during the party meeting in the morning. “For the speaker to reject the request, he needs the agreement of the negotiation blocs. The LKP, a negotiation bloc, has no intention to do so.”

By consuming time at the Whole House Committee, the LKP, theoretically, can delay a plenary session, where the bill would be voted on.

A Whole House Committee meeting is designed to complement the current legislative system, in which lawmakers are voting on bills without in-depth understanding because the bills are deliberated at respective standing committees until they reach the plenary session. According to the National Assembly Act, a Whole House Committee meeting can be requested by more than one-fourth of incumbent lawmakers to deliberate on major bills that concern government organization, tax or other matters that impose burdens on the people before they go into a voting.

The LKP wants the Whole House Committee meeting to block the new investigation agency bill because it is the only option other than a filibuster to delay the voting. LKP officials said they want prosecution officials and outside experts to attend the Whole House Committee to express their opposition to the current plan, designed to largely weaken the prosecution’s powers.

“I don’t think the opposition can dismiss this demand, since the Whole House Committee is intended to have a more serious deliberation on a major bill,” said an LKP official.

An LKP lawmaker said the party will at least save its face, even if the bill is passed. The LKP is largely outnumbered by the ruling DP and other opposition parties that support the bill.

It remains to be seen if the strategy will work. Moon can simply reject the LKP’s request for a Whole House Committee meeting, although it would invite more political repercussions. When the DP made a similar request in November 2011 to discuss the ratification motion for the Korea-U.S. free trade agreement, then-Speaker Park Hee-tae rejected it.