CJ ENM CEO apologizes for ‘Produce’ scandal: Company will start fund to compensate trainees whose careers have been affected

CJ ENM CEO apologizes for ‘Produce’ scandal: Company will start fund to compensate trainees whose careers have been affected 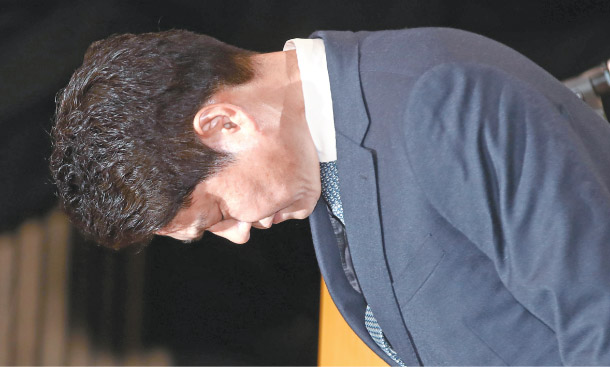 CJ ENM CEO Heo Min-heoi bows to apologize for rigging public votes and lying to viewers of the “Produce 101” audition series on Monday at a press conference held at the CJ ENM Center in Sangam-dong, western Seoul. [YONHAP]

CJ ENM - the entertainment company that owns cable channel Mnet - will use all of the profits made from its successful “Produce” series and the project bands put together by the series to compensate the agencies and trainees who were negatively affected by the results of the show, CJ ENM CEO Heo Min-heoi said on Monday.

Heo appeared at a press conference held at the CJ ENM Center in Sangam-dong, western Seoul, to provide an official apology on behalf of the company for rigging public votes and lying to viewers of the famed “Produce 101” audition series. It was the CEO’s first public apology since the scandal broke this summer.

“I bow my head down and apologize on behalf of Mnet for everything that has happened to have given you a big disappointment,” Heo said.

“It hurts my heart to think about the trainees who gave all their passion for their one and only goal of debuting. I am sincerely sorry. We are sincerely sorry to the viewers and fans who participated in the voting process to an extent that we cannot fully express. This scandal was inexcusably our fault. I feel the gravity of the situation as the CEO.”

According to Heo, CJ ENM will use the proceeds from all four seasons of the “Produce” series as well as the profits earned by IZ*ONE and X1 - the project bands from the third and fourth seasons of the show - in the future to put together a fund worth at least 30 billion won ($26 million) to compensate the trainees and agencies who suffered disadvantages because of the program. The fund will be run for at least five to seven years and will focus on supporting artists launching overseas promotions and smaller agencies in finding and nurturing new talent. It will have an external management system, and CJ ENM will not have a say in how it is run.

Referring to trainees who had their debut opportunities taken away from them as victims, CJ ENM vowed to provide monetary compensation as well as aid in their future promotions, but the company will not be revealing who the victims are, nor the original vote results to the public. The specific compensations made to each trainee and agency will be decided after prosecutorial investigations are over and CJ ENM speaks with the victims in person.

“We do not have the raw data on the number of votes at the moment,” said Shin Yoon-yong, vice president of CJ ENM. “We have to see how the investigation ends to find out. But even if we do get a clear result of who the victims are and who benefitted from the situation, we will not be revealing the initial ranking results because we believe that will cause additional damage in the future.”

“Produce 101” began in 2016 with both hope and worry from the entertainment industry. While it was a chance for smaller agencies and trainees to make an appearance on Korea’s biggest music channel, concerns were also directed at how a TV channel’s entry into the management of K-pop groups could disrupt the K-pop ecosystem as a whole. Regardless of the debate, “Produce” was an annual hit, and its four project bands stormed the K-pop scene like no other rookie groups. But for now, IZ*ONE and X1 remain dormant.

“We will be providing all means possible to make sure that the members of IZ*ONE and X1 start their schedules again. We have concluded that due to the members’ tremendous mental pain and burden, as well as the fans’ wishes for them to come back, it would be the best for us to aide them in all ways possible. But as we said earlier, we will not be making profits from any of the two groups’ promotions in the future,” said Heo.

On Dec. 18, Mnet stated that it will be “staying off audition formats” and will not be airing its scheduled audition show “Teenage Singer” next year. Mnet will establish a viewers committee and fortify its internal regulations.

“We are looking to see if we can make refunds [for viewers’ text votes] through mobile carriers, but it is hard for us to give any specific details right now,” said Shin.

“We apologize that it took us five months to come up with compensation and an apology. But investigations are still going on, and there were limitations to the things we could tell you in the process. We decided it was best to cooperate fully with the investigations but came here today because the artists’ burdens were building up with time.”

Shin added, “We must emphasize again that this is not a problem that arose from K-pop or Hallyu [the Korean Wave] as a whole. This was a misdeed that came from an individual, and we promise that we will not stop supporting the spread of K-pop and Hallyu in the future.”