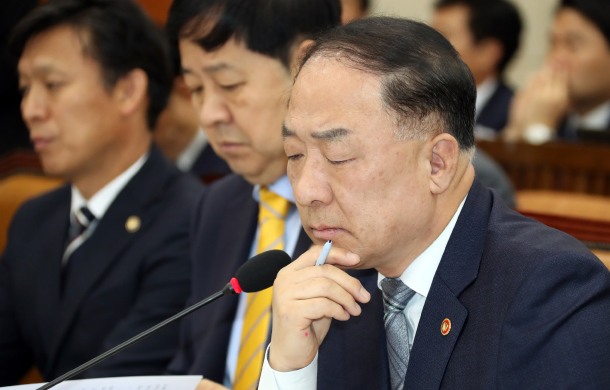 Deputy Prime Minister for the Economy and Finance Minister Hong Nam-ki listens to questions from lawmakers about government ministries, including Statistics Korea, at the National Assembly’s regular audit of the government on Oct. 23. [BYUN SUN-GOO]

Saturated fat is considered an enemy to one’s health, largely because of Ancel Keys’ 1953 Seven Countries Study. He claimed that consumption of saturated fat had a meaningful correlation with cardiovascular diseases, starting the obsession over low-fat diets. However, he selectively used data from seven countries that fit his “conclusion” among data from 22 countries.

This is what Imperial College professor David Hand calls “the law of selection.” Ten targets have an arrow right at the center, but targets are drawn after arrows are shot on the wall — the data was chosen to suit the purpose.

Numbers don’t lie, but the government is often tempted to manipulate statistics. Statistics is called “political mathematics.” You can get in trouble for failing to do political math properly. Andreas Georgiou, who was the head of the Hellenic Statistical Authority in Greece, was indicted for not manipulating statistics. In 2009, he recalculated Greece’s fiscal deficit ratio to GDP from 13.4 percent to 15.8 percent, and the number became the ground for retrenchment for the Greek government. Opponents reported him to prosecutors saying that he had exaggerated the number and harmed national interest.

On Dec. 27, at the National Statistics Committee, Deputy Prime Minister for Economic Affairs and Finance Minister Hong Nam-ki said that statistics that are not trusted by the citizens were meaningless. On the other side of the harsh comment was the controversy over the statistics on part-time workers from October, where their numbers grew to 867,000 — the largest in history — this year. As the survey method changed, the number drastically increased, and controversy amplified as it could not be compared to the past. The Commissioner of Statistics Korea was changed amid controversy over the office’s so-called code statistics. But it seems that even the shift didn’t help improve statistics.

Hong said that statistics is the stethoscope accurately diagnosing the current state and a helmsman showing the direction of government policy. Actually, the answer can be found from what he said. When the stethoscope and helmsman are twisted, everything goes wrong.