Single-person households dominate, get the attention of corporations

Single-person households dominate, get the attention of corporations 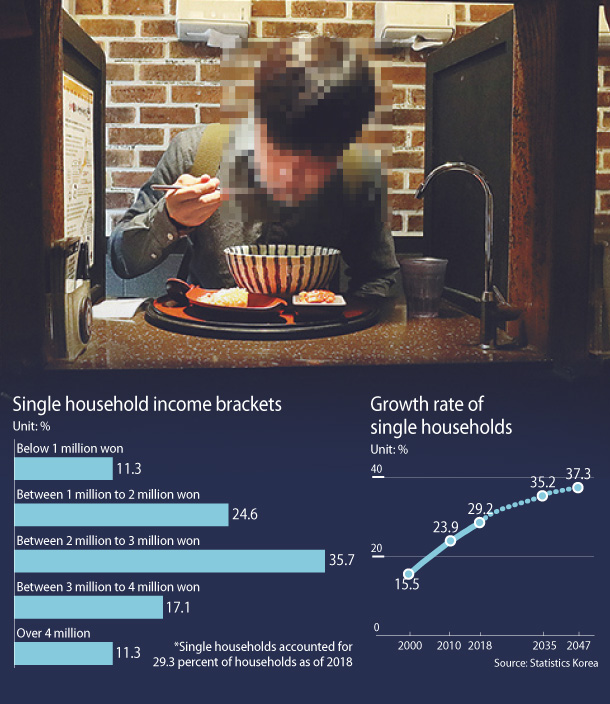 Lotte Department Store now has a special grocery section targeting this demographic. It offers beef and pork packaged in small portions of 100 grams (3.5 ounces). Seafood, such as beltfish, flounder, shellfish and shrimp, are also available in smaller portions.

Lotte Department Store’s main branch in Sogong-dong, central Seoul, even opened a “standing bar” restaurant, where customers can eat without having to sit down.

KB Kookmin Bank recently introduced the “KB 1conomy smart installment savings plan” to accommodate the lifestyle of customers living alone. For single households that have to take care of everything by themselves, the savings plan comes with convenient features and special rates.

The finance industry is offering customized products for single households, such as credit cards with special discounts that might be useful for the single person.

The “1conomy” buzzword, a combination of “one person” and “economy,” has become the new normal. According to Statistics Korea data last Thursday, the number of single households accounted for 29.8 percent of the total, more than 29.6 percent of households of parents living with a child or children.

“Starting this year, single-person households will become the most dominant type of household,” said Kim Jin, director of population census at Statistics Korea. Single households, which were 9 percent of the total in 1990, are expected to be 37.3 percent in 2047.

In lockstep with this trend, industries are taking swift action. Food companies are offering items in small portions and pre-cooked and meal kit products that can be enjoyed conveniently at home. As a result, the domestic home meal replacement market has grown 17 percent a year on average since 2010.

The popularity of small-sized electronics is also pronounced. Sales of an electronic device targeting single or two-person households introduced by Emart in November last year grew 230 percent on year. Ramen pots, sandwich makers, multi grills, and toasters with a one-slice option are all examples of the so-called “single electronics.” Small electronics are gaining enormous popularity in properties below 40 square meters (430 square feet).

“Explosive demand for food delivery services following the rapid increase of single households has led to the growth of delivery service platforms such as Baedal Minjok and Yogiyo,” said Jung Yeon-sung, vice president of Korea Distribution Association. “As single households prefer to ‘lease’ products instead, it has given rise to the growth of the ‘rental industry.’”

The demographic is growing, and it seems not to be a happy one.

Considering that family is the basic social safety net, the single household struggle could burden society. The spread of poverty centered on elderly single households and the increase of lonely deaths are expected.

Single households are also blamed for increasing the amount of waste. According to data published by the Ministry of Environment, a single household generates 207 grams of waste per day on average, which is 103 grams more than that of a family of four.

President Moon has ordered his staff to “come up with comprehensive policies for single households,” calling for changes in housing and social welfare policies currently focused on families of four in the face of the rapid increase of single households.

The increase of single households is a general phenomenon witnessed in economies that have reached an advanced stage of development. But unlike European countries and Japan, Korea is unprepared to support single households. Single households are still discriminated against under Korea’s apartment subscription system and are in unfavorable positions when receiving tax benefits such as the year-end tax adjustment.

“Single households are receiving partial support for housing fees from here and there, but support for the majority of economic issues such as retirement funds, living expenses and medical fees is virtually non-existent,” Jeong In, a researcher from KB Financial Group’s business research institute, said.

Concerns remain that regulatory support for single households can be seen as a reverse discrimination for normal households and even exacerbate the low birth rate crisis in Korea.

“In key advanced countries, most of the welfare policies are applied to multi-person families,” said Park Young-bum, a professor of economics at Hansung University. “Excessive support for single households can delay their marriage and eventually trigger population decline,” added the professor.

“However, as the concept of ‘family’ has changed in our society, a flexible response, such as acknowledging those making a living and living together as a legitimate legal ‘family’ is necessary.”