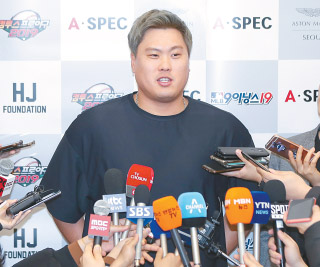 Ryu Hyun-jin of the Toronto Blue Jays speaks to reporters at Incheon International Airport in Incheon on Monday. [YONHAP]

The former Los Angeles Dodgers is also moving from the National League (NL), where pitchers bat, to the American League (AL), where teams have designated hitters (DHs). That’s one more “hitter” that pitchers have to face in the AL.

And the Blue Jays are in the AL East, where they’ll have to contend with a pair of hard-hitting clubs, the New York Yankees and Boston Red Sox, 19 times each in 2020. The Yankees and the Red Sox ranked among the top five in runs scored and on-base plus slugging percentage (OPS) in the MLB in 2019.

Add in the fact that the Blue Jays’ home, Rogers Centre, is one of the most hitter-friendly parks in the majors, and it may seem as though Ryu will be in for a tough ride and will be hard pressed to match his MLB-leading 2.32 ERA from the 2019 season.

But if Ryu had any apprehension about these changes, he wasn’t showing it on Monday.

“I don’t think there’s anything I need to change,” Ryu told reporters at Incheon International Airport in Incheon, after arriving back from Toronto. The Blue Jays formally introduced him as their newest starter on Friday (local time) and finalized their four-year, $80 million contract with the 32-year-old left-hander.

“The most important thing is to make sure I can command the pitches that I already have in my repertoire,” Ryu added. “If I have good command, then I think I’ll be able to keep the ball in the park.”

Ryu threw his four-seam fastball at an average of 90.9 miles per hour, well below the major league average of 93.4 miles per hour. Ryu’s bread-and-butter is his changeup, but he’s also known for his unpredictability with his pitch usage. Ryu will often throw an off-speed pitch at a count when hitters will normally expect a fastball, and vice versa.

The crafty lefty was also excellent at inducing soft contact. According to MLB’s Statcast, Ryu’s 85.3 miles per hour average exit velocity put him in the top 4 percent in the league. And he led the NL with a 3.3 walk rate - the total walks divided by total batters faced - and 1.18 walks per nine innings. He gave up the fewest home runs per nine innings in the NL with 0.84.

Asked about pitching at Rogers Centre, Ryu shrugged off the stadium’s hitter-friendly label and said, “I think every stadium is the same.”

With a wry smile, Ryu added, “I’ve pitched in Colorado,” in reference to Coors Field, the home of the Colorado Rockies and a notoriously homer-happy stadium located in Denver, also known as the Mile High City.

After going 1-4 with a 7.09 ERA in six career starts at Coors Field while pitching in the NL West, Ryu will certainly not miss trips to Denver. But what he will miss is not having a chance to step into the batter’s box regularly.

Ryu, who batted cleanup on his Korean high school team, has always taken pride in his ability to handle the bat against major league pitching. Ryu launched his first big league home run on Sept. 22 this year against the Rockies, living up to his moniker “Babe Ryuth.” Ryu is a career 0.178 hitter in 213 at-bats, with one home run, one triple and eight doubles.

“I think I am going to miss hitting,” Ryu said with a smile. “But we’ll be playing at NL parks [in interleague games] and so if I do get a chance to bat, I’ll do my best.”

Ryu said he is not burdened by the weight of expectations that comes with being the highest-paid Blue Jay pitcher ever and also the highest-paid Korean major league player, in terms of annual salary.

“I understand I have to live up to those expectations,” Ryu added.

“I hope I can stay healthy in 2020 just like this year, so I can pitch a full season,” he said. “I’ll try to give my team a chance to win every game I start.”