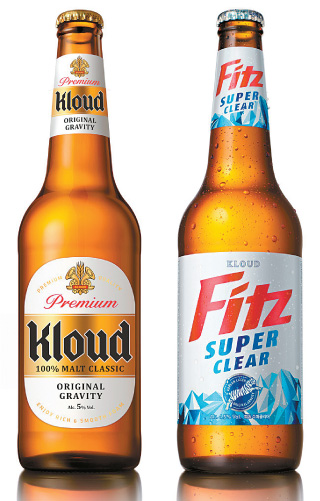 Lotte Chilsung Beverage adjusted the price of its beers following a change in alcoholic beverage taxation.

Lotte Thursday announced it lowered the factory price of Kloud and Fitz Superclear beers from Wednesday.

The latest price change reflects a change in the way alcohol taxes are calculated. From Wednesday, beer and rice wine, or makgeolli, will be taxed by volume and content instead of cost of production.

It is the first revision of alcoholic beverages’ taxes in 50 years.

“We lowered the factory prices to reflect the government policy to expand consumer benefits, with which we agree,” said a spokesperson for Lotte Chilsung Beverage.

Oriental Brewery made the adjustments in October, reducing the factory price of Cass beers. The beer maker lowered the price of Cass by an average of 4.7 percent.

Hite Jinro, which manufactures Terra beer, said it will take action after observing how people react to the price adjustments.

“Revising tax based on alcohol volume could lower the prices of canned beers, but it will increase the prices of beers packaged in other types of materials,” said a spokesperson for Hite Jinro.

Costs may be passed on to consumers disproportionately, because restaurants or bars don’t increase the price by several won, but by 500 won or 1,000 won.