What lurks in ‘The Closet’ is sure to startle moviegoers

What lurks in ‘The Closet’ is sure to startle moviegoers 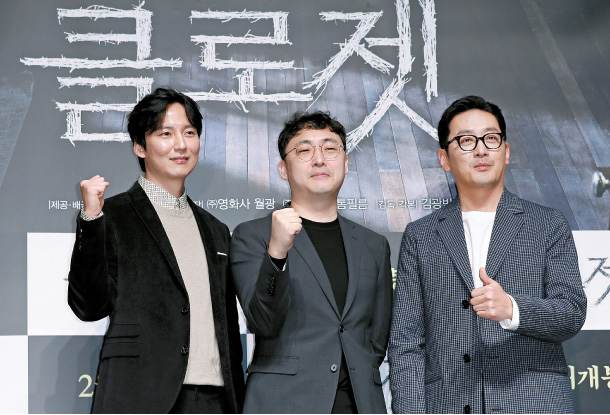 From left, actor Kim Nam-gil, director Kim Kwang-bin, and actor Ha Jung-woo pose for photos at a press event for “The Closet” on Thursday. [NEWS1]

Are there monsters under your bed? Is someone watching your every move from the darkness of the closet? Inspired by those questions, director Kim Kwang-bin wrote the upcoming mystery-thriller “The Closet,” in which single father Sang-won (Ha Jung-woo) enlists the help of YouTuber-exorcist Kyung-hoon (Kim Nam-gil) to help him find his daughter after she goes missing in their house.

While Ha plays a father-to-be in the current box-office hit “Ashfall,” here he is a father who still isn’t sure how to be a parent.

“[He has] mostly been away from home, immersed in his job, and then one day he has to handle the responsibility of being a parent alone,” said Ha of his character. “So although I’m still single, I was able to relate to how awkward my character is to his child.”

When his daughter disappears without a trace, Sang-won is ready to do anything he can to get her back, even going as far as enlisting the help of an unreliable exorcist.

Over the course of his decade-long career, Ha has tried out a myriad of genres, ranging from crime and thrillers to rom-coms, but “The Closet” is the actor’s first attempt at a mystery.

“I’ve never really had to act like I was surprised before, so that was something new for me,” Ha said.

Although the film is being billed as a mystery-thriller, the cast says that audiences will feel differently after watching the film.

“Some might say that it’s a horror or thriller or mystery or drama,” said Ha. “I think each person will feel differently about defining the film because everyone has a different capacity for stomaching the horror.”

“I wanted to talk about families in contemporary society,” director Kim said. “Something lurking behind the closet, or the disappearance of a child is the material we used to get to the essence of the story. I hope people take a chance to appreciate their loved ones around them after they see the film.”