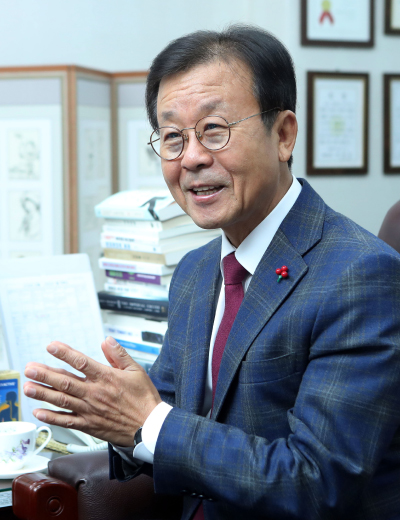 Rep. Won Hye-young, a lawmaker of the ruling Democratic Party, is preparing for a new start once again. Won started Pulmuone, a local whole foods distributor, at 30. After 7 years in management and making 10 billion won ($8.6 million) in sales, he went into politics. He formed the Hankyoreh Democratic Party with the now-deceased lawmaker Je Jung-ku and Yoo In-tae, the current secretary general of the National Assembly. But Won failed to join the 13th Assembly after his defeat in the general elections back in 1988. Four years later in 1992, he joined the National Assembly as a member of the Democratic Party. Since then, Won has spent 30 years of his life as a politician.

He said he would not seek re-election next year and announced he would “live a new life after 70.” He says he wants a “happy life.” The last industry this former lawmaker wants to jump into is “well dying,” or dignified death. (Well dying is a term that refers to the social trend of preparing to confront death in a calm and dignified manner. It includes a wide range of efforts, such as refusing to prolong one’s life or organizing one’s lifelong property.)

The JoongAng Ilbo met with lawmaker Won twice at his office in the National Assembly building on Dec. 19th and on Christmas Eve. The veteran lawmaker started his conversation with gratitude. “I am not trying to be humble, but I realize I have received so much as a politician,” he says. The following are excerpts from the interview.

Q. It has been a while since you decided not to run in next year’s elections.

A. It dates back to when I was preparing for the 20th general elections. I was determined to finish my political career once the 19th Parliament closes. It wasn’t out of some grand idea … I will become 70 after the 20th Parliament, which marks 30 years of my career as a politician. I thought it was time.

Don’t others say it is a bit early?

[If I retire] at age 70, I could at least, for 10 years, maybe a little more, enjoy and relax in the second chapter of life. If I continue politics, I will only end in politics. It would be a shame to miss out on an opportunity to start something new. Isn’t age 70 a perfect point to start my second phase in life? There is an appropriate burden people in their 70s should carry. Even if you are lifting weights, it’s impossible for someone in their 70s to lift a weight they used to lift when they were in their 30s. Life is a journey of letting go of the burden of life.

It is not easy to embark on a new start.

It’s always hard to quit what you used to do and start something new. … Normally people will quit business after they fail or quit politics after losing an election, but maybe I am immune to it since I’ve quit business before.

While you were a lawmaker, you said you were sad to see the revisions to the constitution and the voting system at a standstill.

The foundation for political reform is completed when it is combined in a way that allows the government to institutionalize cooperation through constitutional revision and when the electoral system ensures the equality of the people’s votes as much as possible and embraces political diversity.

I have a feeling that’s not the only one.

What I’ve come to realize after 30 years at the National Assembly is that the nation wants a hardworking Parliament, and the key factor in realizing this is simple. We just need to stick to the basics of parliamentary management stipulated in the constitution and the law. After elections come to a close and Parliament gets ready to open, politicians would waste months negotiating when to decide when exactly to open Parliament. This is such an embarrassing thing to say. The National Assembly is obliged to review bills more than twice every month. When the ruling party and its opposition party are confronting each other, they would boycott the meeting. Even in a confrontation, the two would sneakily agree to disagree with each other. We should be apologetic to the people. Basically, the parliamentary schedule should not be subject to political negotiations. A lawmaker should comply with all the rules for the meeting.

Not only the recent plenary sessions but politics in general seems to now lack the spirit of compromise and negotiation.

Polarization is happening so fast, not only in terms of wealth but also in society and politics. It seems to be a worldwide phenomenon. It’s far deeper than the left and right divide. Elder statesmen in the United States are also worried of the U.S. Congress turning into a “race war.” It’s worrisome. In an era where huge changes in society happen rapidly, the role of politics becomes very important. On the contrary, politics is losing the prestige and influence it once had.

How is the relationship between the ruling party and the opposition party different than what it was back in the past?

I feel bad to see politics shrivel away more and more.

What were your most memorable moments as a politician?

What’s your plan after the general elections?

For one, I am recently making efforts to make Korea the hub for legal disputes on intellectual property. The other is business relevant in fostering a well dying culture. [Currently] hospitals are penalized if they refuse to continue medical treatment that are designed simply to keep terminally ill patients alive. Doctors would perform CPR and put respirators on patients highly unlikely to survive. I’ve made it legal for patients to refuse unnecessary medical treatments performed to sustain life.

The Act on Decisions on Life-Sustaining Treatment is in full effect. The issue of well dying concerns everyone, and we need to make it into a civic movement. What I need to do as a civilian is to start a well dying movement.

Is there a specific incident behind your interest in this topic?

It’s already five years ago; I’ve heard many officials in the medical industry tell me how many people suffer from unnecessary medical treatments to prolong life. I’ve realized it was an important issue.