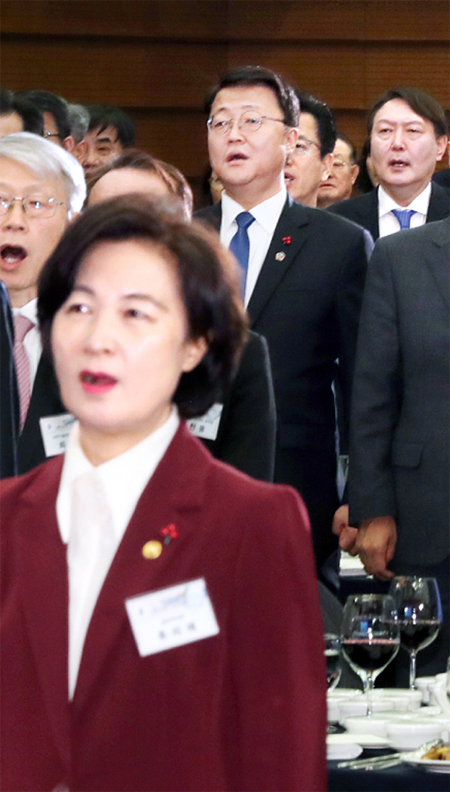 Justice Minister Choo Mi-ae, front left, and Prosecutor General Yoon Seok-youl, back right, sing the national anthem at a joint New Year’s celebration with top officials and tycoons at the Korea Chamber of Commerce and Industry on Thursday. [YONHAP]

President Moon Jae-in devoted Thursday, the first official working day of the new year, to demonstrate his resolve to weaken the prosecution’s powers by appointing a new justice minister to complete the mission.

Moon signed the appointment of Choo Mi-ae, former chairwoman of the ruling party, as justice minister earlier in the morning and hosted an appointment ceremony at the Blue House in the afternoon. At the event, Moon and Choo emphasized their determination to reform the prosecution.

Moon stressed the need to completely change the prosecution’s investigation methods and organizational culture. He said prosecutors must accept the need for reform and go along with it voluntarily.

“Just because prosecutors have powers to investigate and indict, they must not abuse their authority rampantly while ignoring human rights to get the outcomes they want,” she continued. “It is the prosecution’s responsibility to respect human rights while conducting precise investigations into crimes.”

Choo said the National Assembly’s recent passage of a contentious law that splits indictment powers between prosecutors and a new investigative agency is an opportunity to advance democracy. “I will do my best to support this law to realize the people’s hope for reform,” she said.

Earlier in the day, Moon vowed to bring about “definite changes” this year by reforming law enforcement institutions including the prosecution.

“In this new year, I will bring about more definite changes,” Moon said at a joint New Year’s celebration with top officials and tycoons held at the Korea Chamber of Commerce and Industry. “Campaigns to reform the powerful law enforcement institutions and promote a fair society are the starting point.

“I will not stop legal and systemic reforms until law enforcement bodies regain the public trust,” Moon said. “They should also take initiatives for self-reform. As a president elected by the people, I will use all my presidential powers bestowed by the constitution.”

It was rare for a Korean president to bring up his constitutional powers, as opposed to his duties, in a public speech. The remarks hint at Moon’s determination to personally lead reforms, rather than relying on his aides or allies.

Moon’s address was made shortly after he formalized the appointment of Choo as justice minister, although she failed to obtain the endorsement of opposition lawmakers after a confirmation hearing earlier this week. Moon signed the appointment at 7 a.m. on Thursday, and Choo, along with other cabinet members and presidential aides, accompanied Moon to visit Seoul National Cemetery around 8 a.m.

“No law enforcement institution should exist above the people,” Moon also said in his speech. “When everyone is actually equal and fair before the law, social trust is created, and that trust will be the basis of mutual prosperity and national unity.”

He also vowed to push reform in other areas of society including education. “The government has become keenly aware of the strong demands of the people, particularly youngsters, who want the same opportunities and fair competition, and we will live up to their demands,” Moon said, promising to end foul play in such areas as school admissions and employment.

Moon’s latest vow to overhaul the prosecution was made before Prosecutor General Yoon Seok-youl, who also attended the New Year’s event. Although Moon did not elaborate on how he will use presidential powers to reform the prosecution, speculation grew that he was hinting at his power to make appointments. Moon appointed Yoon as prosecutor general in July 2019. By law, the prosecutor general’s tenure is set for two years, but many of Yoon’s predecessors have failed to serve their terms in full.

Moon appointed Cho Kuk, his political ally, as justice minister on Sept. 9, 2019, to weaken the prosecution’s powers. After prosecutors’ probes into suspected academic fraud and dubious investments by his family, Cho stepped down 35 days later.

Moon, then, nominated Choo as Cho’s successor. Although the National Assembly did not endorse her after a confirmation hearing, Moon went ahead and appointed her early Thursday morning, filling the justice minister vacancy after 80 days.

Sources in the prosecution and the Justice Ministry told the JoongAng Ilbo on Thursday that a massive reshuffle will take place as early as next week. They said top-level officials including heads of high prosecutors’ offices will be replaced as early as next week, and a follow-up reshuffle of deputy heads of regional offices and department heads will take place the following week.

The vetting process to appoint new senior prosecutors began even before Choo’s confirmation hearing, the sources said. The Blue House recently asked the police to collect information on about 100 prosecutors eligible for promotions, they said.

“I am not sure if it makes sense that the Blue House is checking on the prosecutors’ reputations through the police,” a senior prosecutor told the JoongAng Ilbo.

“The Justice Ministry is rushing the process faster than our expectations,” another senior prosecutor said.

Choo already hinted that she has no intention to coordinate a reshuffle of the prosecution with Yoon. During her confirmation hearing on Tuesday, Choo was asked if she had a plan to rotate the prosecutors currently investigating the administration and its allies. “Reshuffles do not require consultation with the prosecutor general,” Choo said. “I can listen to his opinion.”

As of now, six top posts including heads of the Daejeon, Daegu and Gwangju High Prosecutors’ Offices remain vacant. After those vacancies are filled, promotions and rotations of posts will follow, triggering a massive reshuffle.