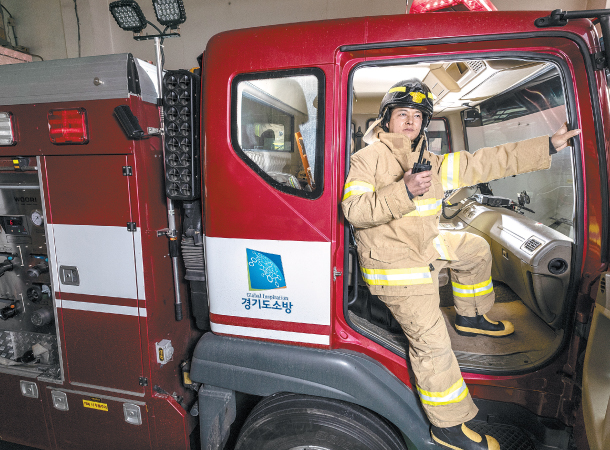 Yang Jae-young, a firefighter who works at the Sadong Fire House of Ansan Fire Station in Ansan, Gyeonggi, is on standby for duty.[KIM HYUN-DONG]

Being a firefighter involves many challenges. The physical challenges are obvious.

Less obvious are the psychological hurdles, which have become an obsession for Yang Jae-young, a firefighter at the Sadong Fire House of Ansan Fire Station in Ansan, Gyeonggi. Yang believes the mental health of his men is the most important factor in their overall safety.

Yang received training from Japanese sports coach Yoichiro Tsuge. The way a sports coach deals with athletes is similar to how a supervisor deals with his own firefighters.

Yang applies the skills he learned from the course when he trains younger firefighters who battle anxiety and depression.
The JoongAng Sunday recently visited the Sadong Fire House while Yang conducted training for firefighters.

During the first session, Yang used a technique called “Field for the future,” which encourages trainees to think about their lives and futures.

Yang set up posts labeled “Happy memories,” “Sad memories,” “Work that went well,” and “Work that went badly.” In front of each post, firefighters told personal stories of past experiences. They talked about their future plans and looked back on their lives.

Lee Dong-gyu, one of the firefighters participating in the training, said it was a valuable opportunity to think about what he should do or shouldn’t do in his life.

Another participant, Yoo Kyung-yeol, talked about a traumatic experience on the job when he discovered a child’s dead body at the scene of a fire.

“On my way back home that night, I had to suffer from guilt that I didn’t arrive at the scene quicker and save the child,” Yoo said. “Some firefighters suffer from trauma and depression as they have to work in extreme conditions. I think this kind of training is essential to firefighters as it reminds them of the reason for their existence.”

The next session was seemingly simple: how to use a fire hose more efficiently and safely. But the training used a Visual, Auditory and Kinesthetic (VAK) learning model, which requires firefighters to use their five senses to recognize any problems with their movements and postures.

With Yang’s advice, Lee realized that he feels much safer and more comfortable when he uses his right knee rather than his left in times of extreme exertion and stress.

“I asked Lee how he felt when he switched his knee while using a fire hose,” Yang said. “I believe this kind of small changes allows a firefighter to spray water more accurately and more safely.”

According to Yang, the United States, unlike Korea, puts a lot of effort into supporting firefighters’ mental health.

“In the United States, if a firefighter has a child of a similar age to a victim at a scene, a psychological counselor works with him. After the firefighter is done with his rescue, the counselor immediately starts his consultation,” Yang said. “I think Korea should start this kind of system as soon as possible so that firefighters can receive help from counselors before they suffer from depression.”

A culture of sensitivity needs to be developed among firefighters, he says.

“Such a culture says we believe in our teammates, put colleagues first all the time and think of citizens’ safety as our first priority,” Yang said, “If we fully enjoy doing our work, children who visit fire stations would want to become firefighters in the future.”

One of Yang’s future goals is to host the 2025 International Fire Instructor Workshop (IFIW), an annual event that gathers firefighters and fire experts to share and exchange their knowledge. Since 2015, Yang has been participating in the workshops as a Korean representative.

In order to make that happen, he applied for a program that will send him to Australia for a year to work with local firefighters.

“In 2002, Dutch coach Guus Hiddink took our national football team players’ stamina to a totally different level by applying a new training method” Yang said, “I will apply athletes’ skills to firefighters’ training so they can take their skills one step further toward safety.”