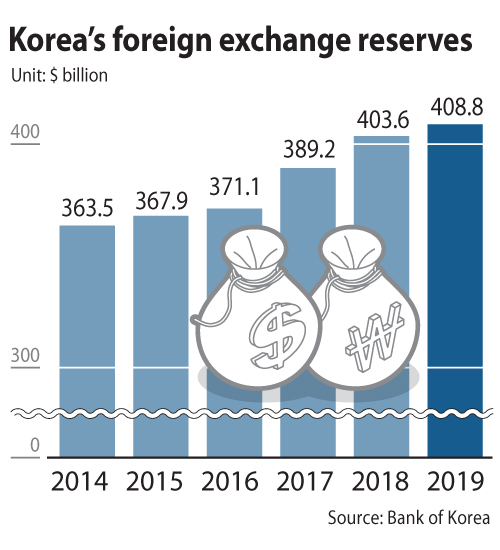 Foreign exchange reserves hit record highs in December as the dollar weakened, which led to an increase in the value of other foreign currencies, such as the yen and the euro, Bank of Korea data showed Monday.

The country’s foreign exchange reserves were $408.8 billion as the end of December in 2019, the bank said, which is $1.36 billion more than the previous month. The reserves have hit record levels for three consecutive months.

“The main reason behind [the highest foreign exchange reserves] is the weakening dollar, which lead to a higher dollar value of assets that are in other foreign currencies,” the central bank said Monday.

The Bloomberg Dollar Spot Index, which tracks the dollar against 10 other currencies, dropped by 2 percent in December.

Ninety-four percent of Korea’s foreign exchange reserve are in securities, including state and company bonds, which translates to $385 billion, up $8.51 billion from the previous month. Foreign currency savings accounted for 3.1 percent, or $12.85 billion, down $7.31 billion from a month earlier.

The reserves also included special drawing rights and the reserve position with the International Monetary Fund, according to the Bank. They totaled $3.35 billion and $2.79 billion, respectively, as of the end of December.

Korea’s foreign exchange reserves ranked ninth as of September last year, dropping from eighth in 2018. India took the No. 8 spot in 2018.

China topped the list, with $3.06 trillion of foreign exchange reserves, followed by Japan, with $1.25 trillion, and Switzerland, at $796 billion.