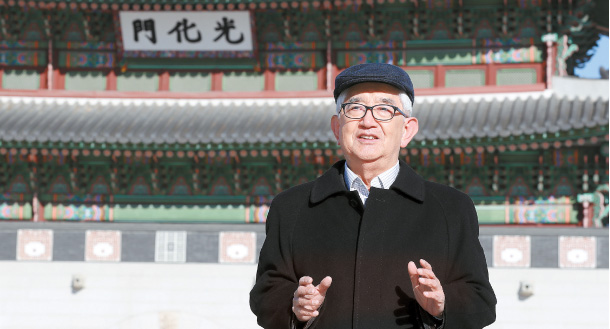 Choi Jang-jip, professor emeritus of Korea University in Seoul and a renowned scholar of domestic politics, talks about Korea’s democracy in an interview with the JoongAng Ilbo on Dec. 31. [BYUN SUN-GOO]

Choi Jang-jip, professor emeritus of Korea University in Seoul and a renowned scholar of domestic politics, believes Korea’s democracy is in crisis and blames President Moon Jae-in for failing to make the most of a hopeful time following his predecessor’s impeachment and removal for corruption and abuse of power.

Instead of embracing a positive turning point for Korean politics, Choi said, Moon steered the nation toward political division.
In a recent interview with the JoongAng Ilbo in Gwanghwamun, central Seoul, Choi talked about the failures of the Moon administration and how to learn from those mistakes for a better 2020. The following are edited excerpts of the interview.

Q. In a book you published in early 2017 after former President Park Geun-hye was impeached by the National Assembly, you expressed hope for Korea’s democracy. But two years later, you’re now saying that Korean politics is in crisis. What do you think caused the current state?

A. President Moon Jae-in should have understood that it was a very important turning point in Korean politics and tried to make vital changes [following Park’s impeachment]. But he didn’t and only brought about the opposite result, so I think this is what you’d call a crisis.

I think that was the biggest mistake he made in deciding what political direction to take after the candlelight vigils [calling for Park’s removal]. At the time, I, too, thought we couldn’t avoid the candlelight vigils and Park’s impeachment and thought they could be positive signs for making a turning point. But the result we face today is polarization between political parties reaching its greatest level. I look back and think that, in dealing with the post-impeachment situation, [the Moon administration] should have made some serious efforts to allow political parties to reach a consensus on what the [political] system would look like after the impeachment. I deeply fear that this political conflict will further push Korean democracy into a crisis in the future.

President Moon emphasized integration in his inauguration speech. Why do you think his administration chose to wage the jeokpye campaign?

I think it was due to the political elitists of the “386 generation.” When you take a look at their words and actions, especially what people like [former Justice Minister] Cho Kuk write on Facebook, you feel some sort of volition to wipe out conservatives and politically divide good and evil. [The 386 generation refers to people who were in their 30s in the 1990s (accounting for the numeral 3), were college students during the pro-democracy movement in the 1980s (the 8) and who were born in the 1960s (the 6).]

Is our democracy regressing because people who get power lack an understanding of democratic institutionalism?

I think so. We can’t deny the fact that Korea achieved democracy thanks to the young college students who led the pro-democracy movement in the 1980s. We should be grateful for their historic roles. The problem is, they subsequently failed to understand democracy as a governing system and [how] to make a good political system, a good political party system and good policies. Looking back, the way the 386 generation understood democracy in the post-democratization era was absolutely wrong. Democracy is a form of a ruling system or government system in which members of the public vote for their representatives through elections and allow those select people to create a government and run policies. I think many people who led the pro-democracy protests think of democracy as the power of the people or a realization of that. It’s not wrong, but if a democratic government doesn’t function properly, an individual’s freedoms and rights become meaningless.

Would our democracy improve if the 386 generation resigns from their top posts in the administration or if they get naturally replaced by a younger generation as time passes?

I don’t think so. What I’ve come to notice is that after the candlelight vigils, people tend to think direct democracy is the correct form of democracy rather than representative democracy. So instead of relying on political parties or the National Assembly to represent societal opinions, people vent their ideas in public squares and plazas in what’s known today as “plaza democracy.” And the shift toward such political views based on civic movements happening outside our political institutions leads us to populism. Circumventing political parties and the National Assembly allows a president and his administration to lead domestic politics because liberals and reformists see the president as a reformist who represents the public’s collective opinion. And in that case, political authority would focus on the president. Would separation of the three powers and checks and balances be possible under such circumstances?

In that case, the solution would be to disperse the president’s authority. If we allow the prime minister to lead domestic affairs and the president to lead national defense and diplomacy, can the issue be solved?

How should we alleviate the political divide?

We have to create an environment in which different virtues, people’s logical thoughts and freedom of the press can all develop in some sort of a pluralistic system. I once attended a meeting where a professor suggested we adopt “self-censorship.” The professor said media outlets were reporting news they thought wouldn’t be attacked by certain groups they were afraid of, unlike in the past when they were afraid of the government’s censorship. There should be more room for public debate in the political sphere, not a place for some single-shot, lopsided opinions, but a place where logically and ideologically refined opinions can freely be shared. I don’t see why that’s not possible.

Even if the next presidential election is won by a conservative, it seems as if Korea’s politics of retaliation won’t end.

Conflict between the left and right is the key attribute of Korean politics, and when there’s an impeachment, the conflict grows. Democracy is about competition between political parties, and when the opposition side sees a chance to become the ruling party, competition can flare. But losers who don’t see a chance of winning are very negative about the democratic system, and they challenge it. The problem is, when opposition parties see their very existence being threatened or think they have a fat chance of winning the next presidential election, they engage in life-or-death battles. And when they feel like they’re not being heard because they’re a minority in the National Assembly, they take to the streets. Look at how muddled Korea is with plaza democracy protesters now.