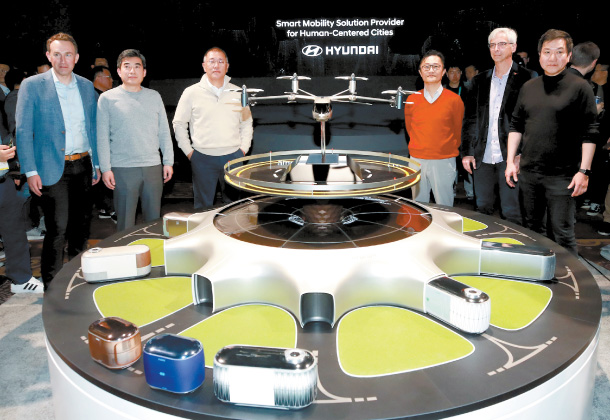 The personal air vehicle (PAV), a term coined by NASA, will run on electricity and soar into the sky vertically, with no need for a runway for takeoff. Technology-wise, it will be more like personal aircraft than cars, a Hyundai spokesman said.

A full-sized concept model of the S-A1 will be shown today at Hyundai Motor’s CES booth. It is designed to hold up to five people. Although the earliest models will need a driver, the company said the fleet will be developed with the idea of dropping the cockpit one day.

The PAV is the first of Hyundai’s urban air mobility (UAM) lineup and the starting point of the carmaker’s future city vision announced Monday.

“For our smart mobility solutions, we considered what truly matters in cities and in people’s lives,” said Euisun Chung, Hyundai Motor’s executive vice chairman, at a company press conference Monday.

On the ground, Hyundai’s vision also includes purpose-built vehicles (PBV), a kind of wireless tram that can be customized for many uses from personal transportation to commercial operations. Measuring 4 to 6 meters (13 to 19.7 feet), they can be small moving stores, cafes or cinemas. Two such PBVs will be displayed at the Hyundai booth in Las Vegas from today.

Both the PAVs in the sky and PBVs on the ground will run on electricity.

The third part of Hyundai’s vision is the Hub, which connects the PAVs and the PBVs. The Hub is composed of a roof with a landing station for PAVs. Its lower half has slots that function as charging stations for PBVs.

Hyundai explained that Hubs can turn into complexes according to the kind of PBVs parked in them. Vehicles that serve as concert halls or mini theaters can combine to form a cultural complex, while different kind of stores and restaurants can form a commercial center.

Behind this vision is Hyundai Motor’s idea that future mobility is not about vehicles alone, but closely related to the entire city infrastructure.

Its concept was put together by a group of experts in psychology, architecture, urban design and transportation who conducted joint research on how future cities can best serve humanity - and what role the carmaker could play to improve mobility and connect people.

A major issue taken into consideration was traffic congestion. Freeing people from traffic congestion and offering space to do whatever they enjoy were priorities when developing concepts for the PAVs and the PBVs.

“We want to shape a future where cities are vitalized with the help of our mobility solutions,” said Chung. “What we’ve seen here today is only a glimpse of what Hyundai will offer in the days to come.”

The Ministry of Land, Infrastructure and Transport also welcomed the carmaker’s announcement.

“The ministry is aware of the importance of UAMs, and we’re willing to offer support to Hyundai and other companies engaging the project,” Kim Sang-do, head of the Transport Ministry’s territorial and urban development office, told local reporters after Hyundai’s press event in Las Vegas.

“Testing is highly important for aircraft. A set of drone laws set to go into effect in May will designate areas where UAMs can test without restrictions. We’ll also come with regulatory frameworks regarding sky routes and security.”