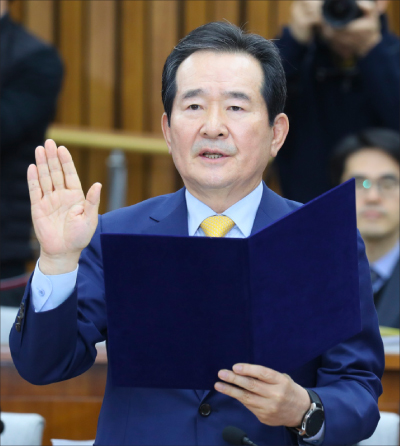 Prime minister nominee Chung Sye-kyun said Tuesday during his confirmation hearing at the National Assembly in Seoul that he will ask President Moon Jae-in to bring opposition politicians into the government following the April general election, to form a “cooperative cabinet” in which parties can overcome their differences.

During opening remarks Tuesday, Chung vowed to “actively” propose to Moon his cooperative cabinet idea after the April 15 general election, stressing it was time for Korean politics to “deviate from confrontation and hostile conflict” for the sake of “political development.”

Chung promised to achieve “social integration” through “genuine communication and cooperative politics,” in part by “listening to the voices” of the people and forming some sort of a discussion platform that allows him to regularly meet with representatives of various political parties and social groups. The discussion platform, he continued, will help the government cooperate with the National Assembly in solving a number of social conflicts, including labor problems.

On the economy, Chung, who worked for SsangYong Group from 1978 to 1995, said he would create amiable conditions for doing business through a “reformation of regulations.”

The main opposition Liberty Korea Party (LKP) didn’t buy Chung’s rosy outlook and denounced his decision to accept Moon’s nomination, arguing it goes against the separation of powers for a former National Assembly speaker to take such a high position in the government.

LKP Rep. Na Kyung-won, leader of Chung’s confirmation hearing committee, said she couldn’t help but feel “sorrow” that Chung agreed to take the position, saying it was extremely rare for a former National Assembly speaker to “harm” the separation of powers and “tarnish the importance” of the parliament by undergoing a vetting procedure to become the prime minister.

Chung’s case is the first time a former National Assembly speaker has been named prime minister. Chung, who served as chairman of the ruling Democratic Party (DP), was the parliamentary speaker from June 2016 to May 2018.

The nominee denied he was violating the separation of powers, saying, “I think separation of powers means to separate functions and roles, not separate personnel.” Chung said he accepted Moon’s offer because he thought it was his “duty as a public servant” not to be picky about the level of a new role as long as it helps the country.

LKP Rep. Kim Sang-hoon said Chung’s nomination would undermine the fairness of the upcoming general elections, given he’s a veteran lawmaker from the DP.