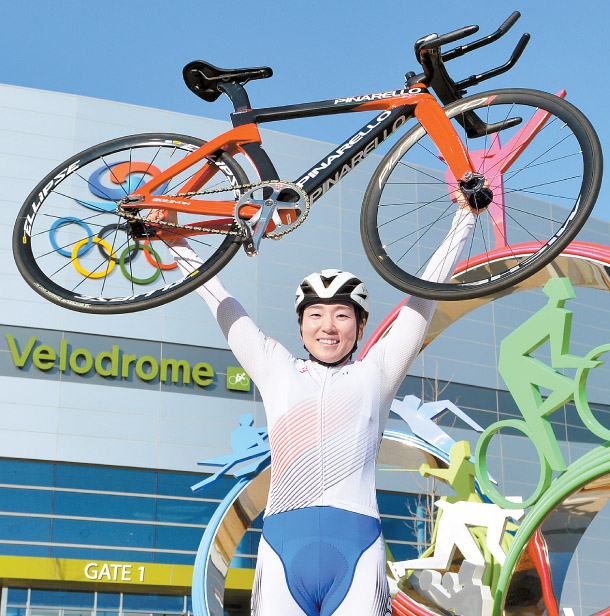 Cyclist Na Ah-reum poses for a photo in front of the velodrome at the Jincheon National Training Center in Jincheon, North Chungcheong, on Dec. 27. [KIM SUNG-TAE]

Na Ah-reum, the top female cyclist in Korea, competed in two Olympics during her career, but the 2020 Tokyo Olympics is expected to be her most important yet. It could be her last, and she hopes to continue her career in Europe following the Games.

At the 2018 Asian Games, Na was the only Korean athlete to pick up four gold medals, as she won the women’s road race, the women’s individual time trial, the women’s madison and the women’s team pursuit.

Her achievements at the Asian Games stood out even more as she returned to the sport only two months after injuring her toe.

“I just thought that I can do it too,” Na said. “I worked really hard for it, and I saw great results.”

“I had a dream of competing in Europe for a long time,” Na said. “But an associate of the team [Ale Cipollini] contacted me by sending me a DM [direct message] on Instagram. At first, I thought it was a joke.”

By signing with the club, Na became the first Korean cyclist ever to sign with a team in Europe. Although cycling is unpopular in Korea, in Europe, road cycling is very popular. Due to this, European countries are the powerhouses in the sport.

Every year, famous road cycling events like the Tour de France and Giro d’Italia are held. Though women’s cycling is not as popular as men’s, the top cyclists still earn millions.

“I was really happy that the team prepared me a uniform that had [the] Korean flag on it,” Na said. “Since I’m not a picky eater, I’ve adjusted pretty well, but I was physically tired because I didn’t get much of a break.”

Despite finally achieving her dream, it wasn’t too easy in terms of her schedule, as she competed for her team in Korea, Italy and the national team. She flew over to Europe twice to compete in 10 events, in addition to the domestic events once a month.

She still managed to finish 13th in her debut event in Europe and still won three titles at the national championships. During the third leg of the UCI World Cup in Hong Kong, the Korean women’s team - Kang Hyun-kyung, Lee Ju-mi, Na and Jang Su-ji - won a bronze. This was the first time ever that Korea won a medal at a Tissot UCI Track Cycling World Cup event.

“To be honest, I couldn’t fulfill my role [before] because I wasn’t at my best condition,” Na said. “We were lucky, and we won a medal from the help of my teammates.”

Although Na said it was the hardest time for her, she said her time in Europe allowed her to gain confidence that she’s not different from the European cyclists.

“I stayed in Europe for 60 days, and I competed for 30 days,” Na said. “I competed in domestic events after a long flight. [Due to this,] my ankle and shoulder pain got worse, and I lost my balance.”

Mid- to long-distance cycling head coach Kim Hyung-il also complimented Na on her hard work and her determination to get through the schedule last year.

“In addition to balancing domestic and club events, Ah-reum also competed at the world cup as a member of the national team,” Kim said. “She was in so much pain that she had to take painkillers. She fought throughout it all by only focusing on cycling and her strong will. Despite the tiredness, she continued because she wanted to be the pioneer.”

“Honestly, I could earn enough by only competing at the national championships,” Na said. “You can’t really earn a lot in Europe at first. But by competing against the world’s best cyclists, I learned that Asians can also do it.”

But this year, Na decided to compete only in Korea, so she could focus on the Olympics. Of the 11 men’s and women’s cycling events at the 2020 Summer Olympics, Korea has only earned one spot in women’s road cycling, where Na is very likely to compete.

Korea has expectations of earning a spot in another cycling event, the women’s team pursuit. Although this event is under track cycling, Na is included in the team, as well as Lee Hye-jin, who is ranked second in the UCI women’s elite keirin ranking.

In team pursuit, two teams of four start on the opposite sides of the velodrome. A team can win by overtaking or catching the opposing team or by finishing the race faster than others. The time of the third rider will be the official time of a team.

If Korea ranks within the top eight in team pursuit, then they can also earn spots in madison, a relay race, and omnium, a multiple race event, in track cycling.

“Currently, we’re not that far off from the eighth- and the ninth-ranked teams [Poland and France] so we’re seeking for an upset,” said Kim.

If Korea earns a spot in women’s team pursuit, then Na can compete in up to four events at the Tokyo Olympics.

“Even if we don’t talk about it, we all know that this is our chance,” Na said. “Since we have good teamwork, we are confident that we can do it at the world championships.”

Looking at Na’s past two appearances at the Olympics, she was far from medaling, as she finished 13th at the London Olympics and 30th in the 2016 Rio Olympics, both in road racing. This time, she believes that her experience will help her at her third and perhaps her final Olympics.

“I was fearless in London, and in Rio, I was doing well in uphill but fell behind in the downhill,” Na said. “I think I got weaker, mentally. Tokyo could be my last. The team in Italy told me to come back, if I can. After the Olympics, I’m going to challenge myself in Europe. In Korea, there are good cyclists who don’t know how to go forward [with their careers]. I want to lead the way for them.”