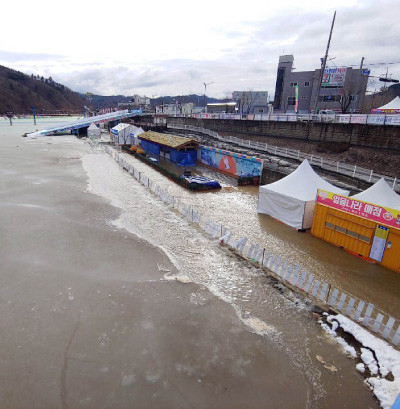 The Hwacheon Sancheoneo Festival, which is scheduled to kick off on Saturday in Hwacheon County, Gangwon, has been postponed due to heavy rain. The festival was planned to run through Feb. 2. [YONHAP]

Popular winter festivals in Gangwon are suffering from unseasonably warm weather and rains.

Hwacheon County announced Wednesday that its Hwacheon Sancheoneo Festival, which is scheduled to kick off on Saturday, has been postponed due to heavy rainfall. The festival was planned to run through Feb. 2.

Hwacheon County was subjected to 74 millimeters (3 inches) of rain since Tuesday. Although about 500 people were mobilized to shovel rain from ice fishing spots, they decided to postpone the festival over worries about possible accidents.

“We don’t have any plans to cancel the festival so far,” Choi Moon-soon, chief of Hwacheon County, said. “We’ll try our best to come up with possible countermeasures as soon as possible.”

The 13th Pyeongchang Trout Festival was also temporarily halted on Tuesday after running 10 days. The opening was postponed from Dec. 21 and officially kicked off on Dec. 28 in Pyeongchang County, Gangwon. It was scheduled to run through Feb. 2.

“We inevitably decided to halt the festival due to weakness of the ice and concerns about possible accidents,” said an official from the Pyeongchang Trout Festival Committee.

About 40 people from the committee were mobilized to remove all 300 facilities including fishing tents that were set up on the iced-over Odaecheon Stream on Tuesday.

“The decision to reopen the festival or not will be made by Friday afternoon,” said Gwon Young-taek, an official from the Pyeongchang Trout Festival Committee.

Also up in the air is the fate of the Frozen Jecheon Festival Season 2, which is supposed to kick off on Saturday in Jecheon, North Chungcheong. The city of Jecheon was drenched by 35 millimeters of rain on Tuesday, and sledding zones and a snow maze melted.

“A setback is expected in terms of the thickness of the ice due to the two days of rain,” a Jecheon city official said. “We hope the ice will be frozen more thickly as the weather is predicted to be about minus 7 or 8 degrees Celsius (17.6 or 19.4 degrees Fahrenheit) starting Thursday.”

The Hongcheon River Gingseng Trout Festival, which is scheduled to start on Friday, is also plagued by ice that has been thinned down by heavy rainfall.

The Hongcheon Culture Foundation expanded the size of their indoor fishing area, which is less affected by rain. It is about four times the size of last year’s area, and nearly 200 people can fit inside.

“The festival will kick off on Friday as planned since we have prepared some countermeasures in case of ice melting,” Jeon Myeong-joon, chairman of the Hongcheon Culture Foundation, said. “We plan to open ice fishing spots as soon as possible as it is predicted that it will be cold again soon.”