Discovering a new life after retirement in the streets of Paris:‘Montmartre de Papa’ shows how an art teacher achieved his dream

Discovering a new life after retirement in the streets of Paris:‘Montmartre de Papa’ shows how an art teacher achieved his dream 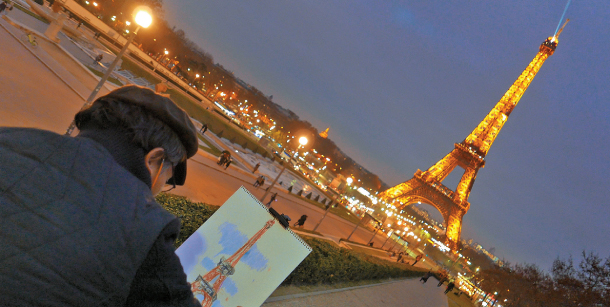 Min Hyung-sick, a retired art teacher, started his second life as a licensed street artist in Montmartre hill with the help of his son, Min Byung-woo.

In an era where longevity is no longer a novelty, some people worry how they will spend the rest of their lives after they retire. But director Min Byung-woo knew exactly what his father would do after retirement: go to Montmartre hill in Paris to become a street artist who could draw to his heart’s content in the center of the art hub.

Director Min’s father, Min Hyung-sick, had been a middle school art teacher for 34 years when he retired in February 2016.

“I have it all worked out,” is what his father would say when the director would ask him what he planned to do once he retired. So the son decided to record every step of the way - from his father’s very last day of school to becoming an officially licensed artist with a designated spot in the Artist Market at Tertre Square.

In order to become a proper street artist that can be active in Montmartre hill, one must gain approval by the City of Paris through proving their artistic capabilities. There’s a 10-year waiting list for hopefuls to set up an easel there. And chances are even slimmer for foreigners without a residence permit - the city hall only selects a handful of foreign artists every year to allow them to draw and sell their art in the famous market.

Although they were prepared to try again if they failed to acquire the license, or even just visit Paris as tourists for the father’s sake, Hyung-sick passed on his first try, much to their surprise. So in December 2017, the director, his father and his mother, Lee Woon-sook, headed off to Paris for the start of his father’s second life.

“What I felt over living all these years is that, although there is no need to purposefully suffer in your life, there is a charm in doing things that are not considered conventional,” said Hyun-sick.

The documentary film containing Hyung-sick’s one-month journey, “Montmartre de Papa,” was released on Thursday, and the Korea JoongAng Daily had a chance to meet the film’s two protagonists - Hyung-sick and director Min - to get a behind-the-scenes look at their trip. 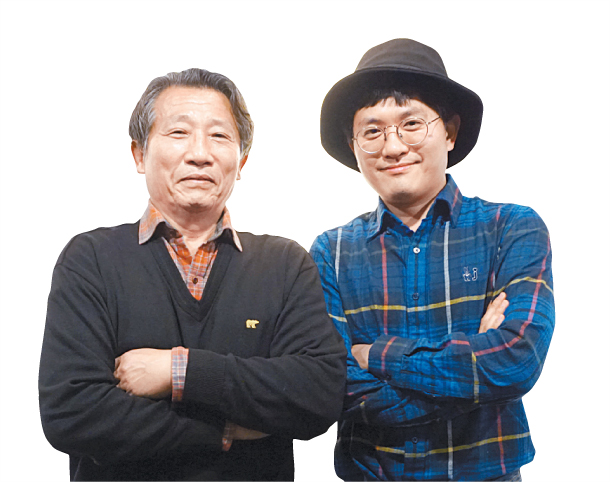 Q. Where did you get the inspiration to become a street artist in Montmartre? Have you always had that dream?

A. Hyung-sick: It was more of a feeling of regret [that led me to Paris] rather than a dream. Soon after I got married, I was selected for a national scholarship that picks one school art teacher - and they should be married, too - which would fund half of the living expenses while I studied abroad. If my wife had said yes, I would have gone there, but she didn’t want to. So I gave up that dream, but it’s been sitting in the back of my mind all this time.

Byung-woo: I grew up hearing about this all my life, so I knew that he wanted to go to Paris after he retired. So, on his last day of school, I just grabbed a camera and started filming him, but days turned into months, and there was no process. It took us almost two years to get there. I would ask him, time to time, how he was going to prepare, but his reply would always be the same: “I’m going.”

But I felt that he was only vaguely dreaming about it instead of making any headway into it, so I wanted to push ahead with the plan. And you never know what’s going to happen next in life, right? I felt that when one of my best friend’s father passed away and he told me that he had witnessed how his father had trouble adjusting to life after retirement, because there was nothing for him to do, so he would often be feeling down.

I thought that if I could kick-start the process, we could make a pathway. So I asked through my acquaintance for someone fluent in French and helped him prepare the documents for the license. That’s when he became really motivated to start preparing for the journey himself.

How did you feel during your retirement ceremony?

Hyung-sick: You’ll notice that when you see the film, my eyes were closed most of the time at the ceremony. If I had opened them, I would have cried. Because I didn’t know how or what to feel about this strange sense of freedom. I would be cut out from something that I’d been doing [for 34 years]. For about the first two months I was very depressed. When I would pass by the school and see the students on the field, it felt very strange.

I think the film will also stir up some desires among the audience to go to Paris. You [Hyung-sick] seemed to have visited a lot of art museums and places to gain inspiration for your drawings. What are your favorite artworks that you created?

Hyung-sick: It’s hard to pick. Museums such as Musee Marmottan Monet, Musee d’Orsay, Musee Rodin and works by great artists Van Gogh, Chagall and Rodin were all breathtaking to see, and especially memorable because I had studied these drawings all my life, and this was the first time I had seen them - actually see and feel the colors and brush strokes - with my own eyes.

But what I regret the most as a teacher is that young students hardly get the opportunity to see these great works of art. If the government could set up policies to send some of the gifted students abroad to study the paintings even for a few months, I think it could lead to the birth of some of the greatest artists in Korea, equivalent to soccer talents Son Heung-min and Park Ji-sung.

My favorite piece that I drew would be the ones that I drew of the Eiffel Tower. I found my own style and color of the tower and drew several versions of the tower from my perspective, some of them even after I got back from Paris, and I’m pretty satisfied with them. 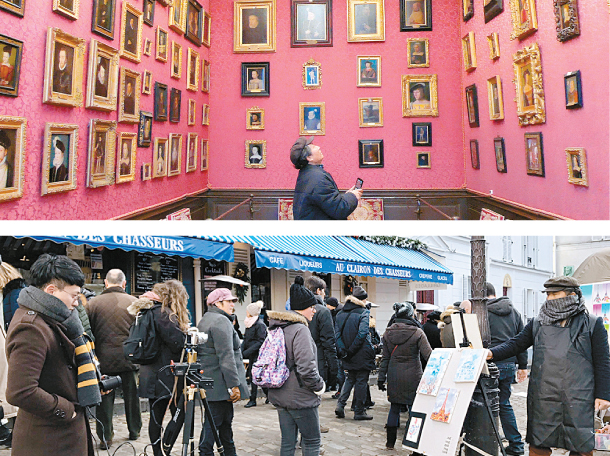 At the top, Min Hyung-sick admiring the portraits of influentials from the les Montmorency family at Chateau de Chantilly. Above, director Min Byung-woo filming his father draw in the Artist Market in Tertre Square, where only officially licensed artists can set up their easels and draw and sell their artworks in designated areas approved by the City Hall. [TRIPLE PICTURES]

Do you plan to go back to Montmartre to draw? What are your plans for the future?

Hyung-sick: If it wasn’t for this film, I would be back in Montmartre right now, drawing. (laughs) But I would definitely like to go back one day, even alone this time. I also have this goal, maybe it’s even a little out there, but I want to die one day still holding a paintbrush in hand, like the great artist Renoir did. If you read his biography, it’s said that he continued to draw even after he had a stroke. This purpose is reshaping my whole life now, a guideline that I look back to whenever I’m feeling lost.

Byung-woo: We’re actually planning to hold an exhibition in February. Part of the reason is because I wanted my father to continue drawing instead of this being a one-off thing. What I felt through traveling with him and seeing him draw is that he is better at what he does than I’d thought him to be. This was the first time I felt that way. There are his drawings hanging in our home, but I had spent more time with my mom than my dad, and she’s really skeptical about his skills. (laughs) So I think I was affected my mother’s opinions.

Even though we’re back, I wanted him to feel motivated to continue drawing and really live his life to the fullest, and hosting this exhibition was my way of boosting his spirits. To host these kinds of personal exhibitions, we need to have at least 30 to 40 pieces of art. Right now, he’s made about 20 drawings, so he is still working on filling up the space.

As Hyung-sick said, there are older people now who feel depressed and lost after their retirement. How do you think they can overcome that sense of loss even if they don’t have any talents or particular hobbies?

Byung-woo: I actually want viewers - particularly sons and daughters - who see this film to think about their parents, as I did for the first time. But more than that, it was a chance for us to bond. I didn’t know that he had his own artistic philosophies and standards, and it was a chance for me to look back on my own standards about art.

So all in all, it became a turning point for me too, because it was the first time I thought about my parents, and more importantly, to wonder about what dreams they had [instead of only pursuing mine]. To tell you the truth, there were times when our relationship was strained, but now I think I understand him much better than before.

But I still don’t think my father has any special talents or set of skills that particularly distinguish him from everyone else. I did help him, in a small way, to get started on his new path. And if sons and daughters could start to pay attention to their parents’ desires - it doesn’t have to be that much - if we start to interact and communicate with one another, I definitely believe that it could lead to creating a synergy in overcoming the generation gap and help elders set a new direction in their lives.