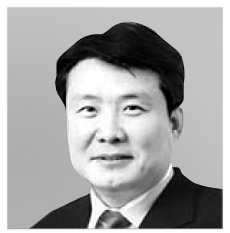 Steve Jobs believed a device was useless if it was hard to use — no matter how advanced its technology was. He was ousted from Apple, which he had co-founded, and after eventually returning to its management, he came up with the concept of an “elevator pitch.” His products should be explainable in a period of time equivalent to an elevator ride. He bet his life on “simplicity” and succeeded.

The same concept applies to political products. The public wants comfortable, easy and simple things. Simple and clear messages work. Past presidents read the spirit of their times and brought minds together. Former president Kim Young-sam said that daybreak would come even if you twist a rooster’s neck and repeated the democratization message over and over. One president was elected by advocating conscience with action and a world for the people.

“New politics” was the slogan of Ahn Cheol-soo, a former software tycoon who is about to return to politics, but it seems that his message is always lost in the mists. While he advocated a fight against the establishment, he did not promote new faces. He failed to distinguish himself from old politics. He was called “unpolitical” by choosing a vague path. He was caught between the gears of the two big parties representing the Yeongnam and Honam regions with an awkward coalition and an obscure stance.

As a result, he fled politics. In the end, new politics became something everyone knows but cannot explain. Ahn was called the messiah of Korean politics, but he had to spend time abroad to “reflect and recharge” because of his faint identity. He became a lost child in politics. He failed to make his own space.

Voters didn’t ask him to come back. He returned on his own. But he still hasn’t abandoned ambiguity. Ahn says he “hasn’t decided on a position, is thinking about which vision and value to represent and will discuss with many people what kind of vessel would contain them.” A year and half ago, Ahn went abroad to find the path. Maybe he couldn’t find it.

Ahn said he was not integrating the conservatives, returning to the Bareun Party or joining a new party. He is to make the fourth choice of creating another new party, which somewhat makes sense. He said the opposition needs “innovation more than integration.” The opposition is largely responsible for ruining politics and leading the country to this state. It cannot avoid accountability. Reform is necessary.

The problem is that a general election is imminent like an elevator ready to go up, and the election stage hasn’t changed since Ahn left. This general election is practically a midterm for the administration. So he has to sell something in the short period of time in the elevator. The fourth way leads to questions. What is his solution for not repeating the past failure of dividing the opposition votes and ending the race in third place?
Of course, there is the Ahn Cheol-soo phenomenon. Politics is so stalled that even that hasn’t disappeared. But there is no reason that the phenomenon is exclusively for him. A few days ago, a party was founded, and all attendees wore T-shirts and jeans. It is the dress code of Steve Jobs, synonymous with innovation. The outfit must contain a hope for political innovation. Everyone is competing to represent innovation and changes.

The space for Ahn is even narrower than in the past election. Polls show that 70 percent of the respondents “do not support” the party that Ahn hasn’t even founded. He was named the most unlikable politician. Voters are worried that he would repeat the Bareun Party once again. It would be nice if he could convince someone that his fourth way was not a rerun of 2018, but I am doubtful.

If he advocates to bring down hegemony, it would be simpler to help anti-hegemony. Korean politics is ailing with arrogance and self-righteousness of the ruling power. The opposition party is responsible for not checking the administration by fighting internally. The discussion never gets simple. Steve Jobs said that clarity and simplicity can move mountains.