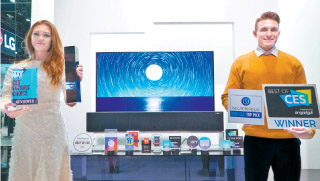 Engadget is a multilingual blog network and the official award partner at CES.

LG took the award for the sixth consecutive year at CES.

“LG has added a ton of new features, like Nvidia G-Sync support, which makes your games look smoother, and Filmmaker Mode, which disables motion smoothing and other unnecessary video tweaks,” wrote Engadget senior editor Devindra Hardawar. “And they still have all the benefits of OLED, like an insanely high contrast ratio, inky black levels and rich colors.”

Its rivals were Samsung and Vizio, an Irvine, California-based consumer electronics firm.

“LG’s OLED TVs have been recognized as the best TVs in the TV market, which is being reorganized to center on OLED,” said a spokesperson for LG in a statement.