When inspiration strikes: Exhibit highlights works from artists who get their ideas from unlikely places

When inspiration strikes: Exhibit highlights works from artists who get their ideas from unlikely places 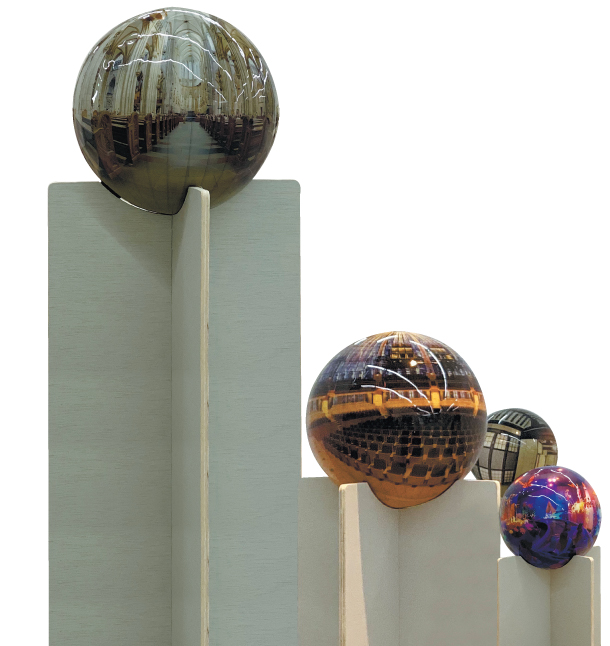 Greek mathematician Archimedes realized he could measure the volume of metal with water when he stepped into the bath and saw the water flood out of the tub. British scientist Isaac Newton realized that gravity pulls everything down to the ground when an apple fell from the tree and hit his head, or so the stories go. Artist Pablo Picasso saw an abandoned bicycle and created his famed installation piece, the “Bull’s Head” (1942), with the bike’s handle and seat.

Inspiration came from the smallest things in life for these geniuses - but they’re not the only ones inspired by the subtleties of life.

Savina Museum in northwestern Seoul presents “Serendipity,” an exhibition featuring works by 21 artists who were influenced by their very own eureka moments. From hospital X-rays to trees, eggs and cancer cells, “Serendipity” is a look at how inspiration changes the smallest things into works of art with the power of imagination.

While it’s recommended that you read the explanations of each work at any art exhibition, it’s crucial that you do so at “Serendipity” to make sure you understand each piece to the fullest.

Without reading the info, for instance with artist Son Bong-chae’s drawings on transparent polycarbonate sheets, it is easy to assume that he stacked the sheets together just to create a 3-dimensional effect and give depth to his work. But in fact, he got the idea when he was lecturing at a university in 2000, when a student used an overhead projector film to cheat on his test. He saw that the transparent film created a new image when its letters overlapped with the letters below the film. He got the idea to overlap five to six sheets of polycarbonate, each with similar but slightly different images, to create a single image with depth.

For photographer Zu Do-yang’s works, understanding that he started to think about image distortion while using to learn a camera in the 1990s adds to the fun of seeing his fish-eye photo of the Seoul Jogye Temple, titled “Emptiness XV” (2019).

The inspiration for Bernd Halbherr’s spherical works with 360-degree panoramic pictures of indoor sceneries comes from a visit to Germany’s Wiblingen Abbey in 1993 and the dome ceiling inside the monastery. 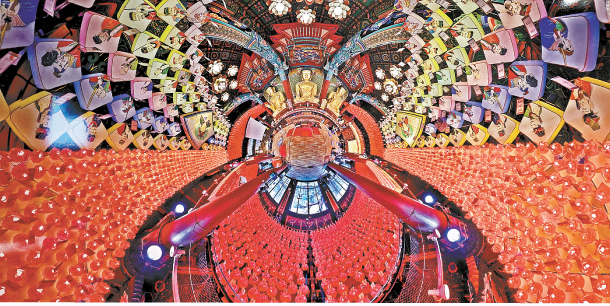 “Serendipity” exhibition at Savina Museum tells the stories of the moments that artists were inspired to make the works on display. After photographer Bernd Halbherr visited Germany’s Wiblingen Abbey, he was inspired to make his panorama series, below. Left is photographer Zu Do-yang’s photograph of Jogye Temple, central Seoul. [JEON TAE-GYU]

It’s almost eerie to learn that artist Yang Dae-won got his inspiration from pictures of cancer cells in a hospital lobby.

“There are important moments that artists have in creating their art world,” said Lee Myung-ok, director of Savina Museum. “We focused on the fortunate moments that worked as the motif behind completing an art philosophy. We wanted to track down how inspiration leads to the creation of a project through research and experimentation.”

The word serendipity was coined by British writer Horace Walpole in 1754, in his story “The Three Princes of Serendip.” He wrote that the princes in his tale were “always making discoveries, by accidents and sagacity, of things which they were not in quest of,” and used the term serendipity to refer to the moments when people find something precious by chance - like Archimedes, Newton and Picasso.

For many of the artists in the exhibit, that serendipity came from a familiar place - home. Choe Hyun-joo’s use of images of eggs came from her childhood, when one day she was so captured by the warmth and beauty of a fried egg her mother made her when she was 5 years old, while Yoo Hyun-mi got her inspiration from when she was putting together a puzzle with her son.

For works by Han Gi-chang and Kim Bum-su, it’s important that you first take a look at the works from afar. What seems like a black-and-white painting of a forest is actually an image created by multiple staplers that seems almost obsessive when seen up close, while the colorful patterns of Kim’s works are actually a repetition of camera negatives he found in 1996 of Michael Jordan and his Coke advertisement.

Although it’s not directly linked to “Serendipity,” a solo exhibition of work by photographer Terry Border, titled “Eat, Play, Love,” is also on display at the museum. The photographer is known for creating images of food and other everyday objects to create humorous sceneries. For instance, in “We Were Made For Each Other,” a toast with peanut butter proposes to a toast with strawberry jam on it. “Society has been quite dark and unstable lately,” director Lee said. “We hope that like these artists, visitors will also have their own moments of serendipity.”