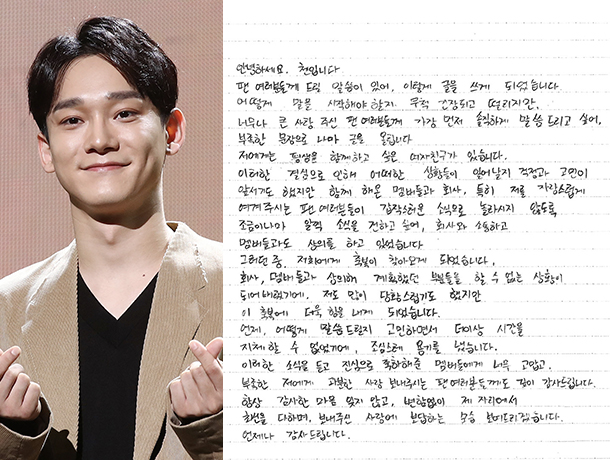 Chen of boy band Exo is getting married, his agency SM Entertainment revealed on Monday.

“Chen has met his beloved partner and will get married soon,” the agency said.

The bride is not a celebrity and the wedding will be held with only family present, according to the agency.

Chen uploaded a picture of a handwritten letter on Monday afternoon through his fan community named Lysn.

“I wanted to tell the fans - who have given me so much love - first and honestly, ” he wrote.

“I have a girlfriend that I would like to spend the rest of my life with. I am worried about what will happen in the future because of this decision, but I wanted to give the news to my fans as early as possible.”

He also revealed that the bride was pregnant, alluding to the baby as a “blessing.”

“I was in talks with the company and the rest of the members when a blessing came [...] It gave me the strength. I couldn’t waste any more time thinking about when and how to say this. So I gathered my courage.”

He finished the letter by thanking fans and the other members of the group for their support.

Chen debuted as a member of boy band Exo in 2012. He has also released music as a solo artist.