“A field that needs capacity expansion is electrification; we should constantly increase production to grow big. That would take around 3 to 5 trillion won,” Ko said last week during the CES 2020 trade show in Las Vegas.

“Another 4 to 5 million should go to proactive [research and development] for parts and technologies that would drive future growth, including more than 150 billion won in investment in start-ups.”

While the headline number is big, the company has the wherewithal to make the investment.

The auto parts maker, 17.2 percent owned by Kia Motors, reported 7.4 trillion won in cash holdings as of early 2019 and has 1.4 to 2 trillion won coming in every year from its after-sales service business.

From that 12 trillion won over the next three years, the company will have 9 trillion won to work with after setting aside cash of about 3.5 trillion won for reserves, explains Ko. 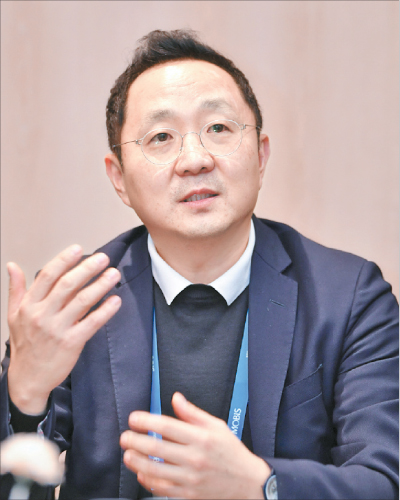 Apart from the investments, 1 trillion of that 9 trillion won will be returned to shareholders.

His role at Hyundai Mobis is to explore potential business fields, mergers and acquisitions opportunities and lay out plans for future mobility.

“Automotive was a business that always came up as a future growth engine when consulting for major domestic companies. And among many segments, [original equipment manufacturer] and auto parts are where the most innovative changes happen,” he said.

The company faces fierce competition against larger players, such as Bosch or Continental. Hyundai Mobis is still heavily dependent on Hyundai Motor and Kia Motors, which took a 90 percent share in the auto parts maker’s sales last year.

“The long-term goal is to fill a minimum 40 percent of our sales from non-Hyundai clients - we announced this aim in 2018 and the deadline set back then was 2025,” said Ko.

The vice president said that the company’s broad product range, which includes airbags, lamps, sensors and eco-friendly parts, wouldn’t have been possible if weren’t for the close relationship with Hyundai Motor and Kia Motors.

Adaptive Driving Beam is one example. The system can detect obstacles in front of the vehicles and obtain information on the road’s curves from steering angle sensors, automatically controlling the headlight at night.

“Other companies would be able to do this too through collaboration, but we can do it internally. The experience Mobis has and the internal cooperation system enable us to react to the market with speed,” said Ko.

He added that the auto parts maker has more opportunity to co-develop technology with mobility service providers, as opposed to carmakers whose main role is to supply vehicles. As for components that have the highest growth potential, Ko mentioned the Advanced Driver Assistance System (ADAS), infotainment and electrification.

“There are newly opening markets, and the scope of parts selected will greatly increase,” he said. “Level 2 ADAS is now supplied to large-sized luxury sedans. The ratio of customers selecting this as an option was low, but it’s getting higher. If more options are offered in the future, the growth potential for sensors and radars will increase even more.

“We should continue to back Hyundai Motor’s growth, but investments should be focused to align with the market trend, catering to non-Hyundai clients,” added Ko.