Top Samsung executives agree to follow the law and rules

Top Samsung executives agree to follow the law and rules 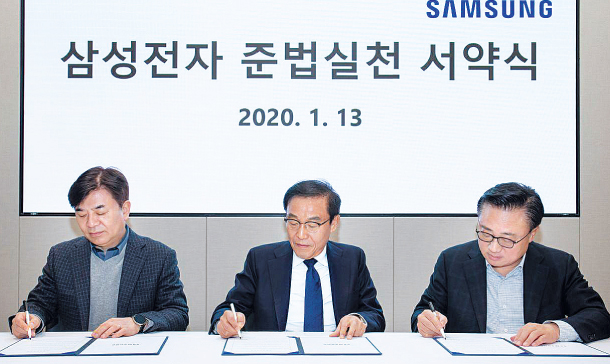 Three presidents at Samsung Electronics signed a pledge Monday to comply with the laws in carrying out their executive duties.

The commitment they made is unconnected to the establishment of a compliance surveillance body, which will be led by former Supreme Court Justice Kim Ji-hyung.

According to Samsung Electronics, the pact has three main conditions: The executives promise to abide by laws and internal rules; they will not give orders for or condone illegal activities; and they will lead efforts to establish a corporate culture prioritizing legal compliance.

This month, the seven companies are slated to sign an agreement with the monitoring body - which will officially put them under its surveillance. The panel is composed of seven members, including Kim, two professors, an attorney, two members of civil society and a Samsung Electronics adviser.

Although its activities will be funded by seven Samsung companies, Kim stressed in a press event last week that body “will be operated independently from Samsung’s involvement.”

Details on procedures for investigation and the body’s mandate have not yet been decided.

The establishment of the panel comes after a Seoul High Court judge overseeing a case in which Lee was found guilty of bribery demanded in October that Samsung Group develop an internal system to assure that it companies and its leaders follow relevant laws, regulations and business rules.

Lee’s bribery case, which involved illegal payments made during the Park Geun-hye administration, is being retried.