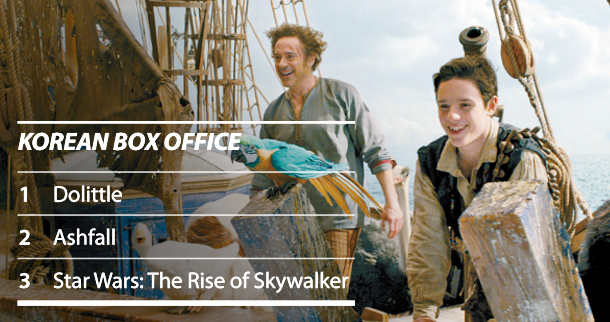 Doctor Dolittle and his animal companions brighten up the sluggish local box office over for the weekend, selling an estimated 718,000 tickets in its debut. [UNIVERSAL PICTURES]

Robert Downey Jr. and his animal buddies took over the local box office for the weekend.

“Dolittle” attracted 718,0000 people to 1,290 screens in its debut weekend - not a bad start, but a mediocre opening considering that Korea was the first international market to get the film in 4DX. The Hollywood film was the first of three movies being released this month in Korea about animals. The other two, “Mr. Zoo: The Missing VIP” and “Secret Zoo,” are scheduled to hit local theaters in the next two weeks.

The film tells the story of Doctor Dolittle (played by Downey), a famous but eccentric veterinarian with the ability to talk to animals. Dolittle travels around the world with the love of his life, his wife Lily, with his animal friends. However, when Lily dies during one of her voyages at sea, Dolittle becomes heartbroken and hides himself away in his mansion for years, with only his animals to keep him company.

But when Queen Victoria falls gravely ill, the entire kingdom’s fate is suddenly in the hands of Dolittle, as he is the only person who can travel to a mystic island to acquire an antidote for the queen with the help of his animal friends. The animals are voiced by stars such as Emma Thompson, Rami Malek, Kumail Nanjiani, Tom Holland, Craig Robinson and more.

Local disaster blockbuster “Ashfall” amazingly beat out heavy contender “Star Wars: The Rise of Skywalker” by a narrow margin and held on to second place, drawing 265,000 moviegoers to 881 screens. According to the latest update from the Korean Film Council, the film has surpassed 8 million ticket sales as of Monday morning.

The ninth and final part of the “Skywalker saga” seems to have failed to earn approval from local fans, landing in third place for the first weekend. The Hollywood blockbuster was seen by only 262,000 people at 948 screenings. The film details the final battle between Rey, the last Jedi of the Resistance, and Kylo Ren of the First Order and ultimately, the Galactic Emperor Palpatine.

Local historical drama “Forbidden Dream” took the fourth spot after it was seen by 138,000 people at 685 screens.