Seoul’s top prosecutor on board

Seoul’s top prosecutor on board 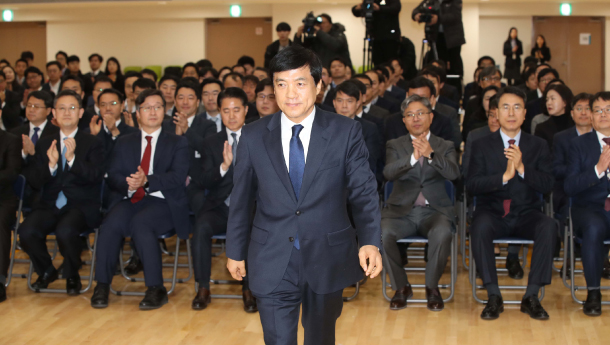 Lee Sung-yoon, the new chief of the Seoul Central District Prosecutors’ Office, walks to a podium at his inauguration ceremony on Monday where he vowed full support to the government’s prosecutorial reform drive and urged his underlings to do the same. [OH JONG-TAEK]

The new chief of the Seoul Central District Prosecutors’ Office, Lee Sung-yoon, vowed his full support to the government’s prosecutorial reform drive on his first day at work Monday and urged his underlings to do the same.

Lee, who formerly led the prosecution bureau of the Ministry of Justice, stressed the protection of human rights during a speech at his inauguration ceremony, saying it was “the very reason why the prosecution exists.”

The prosecution “needs to practice its prosecutorial right through self-control and restraint and by giving one more thought in each process of every step of the probe,” Lee said during the event, held at his office in Seocho District, southern Seoul.

“Substantive truth must be told, and human rights need to be protected through a restrained investigative process,” he said, “and only then will an investigation result acknowledged by everyone related [to the probe] be brought about.”

Lee urged rank-and-file prosecutors in his office to listen carefully to the wants of the general public and to carry out probes based on the perspective of the people. Lee, an avid supporter of President Moon Jae-in, also underscored the necessity of prosecutorial reform, saying the only way to regain public trust was to live up to the public’s fervent desire for such reforms.

In doing so, Lee said prosecutors must focus their attention on issues related to ordinary people’s lives, a remark that came amid rumors the Justice Ministry is planning to downsize offices within the prosecution that are in charge of cracking down on corruption cases involving high-level government officials and election meddling.

The Seoul Central District Prosecutors’ Office is currently investigating former Justice Minister Cho Kuk and his family for alleged academic fraud and financial wrongdoings. The office is also digging into suspicions that the Blue House meddled in the 2018 Ulsan mayoral election to help a candidate backed by the ruling Democratic Party. Lee was among 32 senior members of the prosecution who were moved to new posts, a major reshuffle that came on the heels of the new Justice Minister Choo Mi-ae’s inauguration on Jan. 2. Cho Kuk stepped down last October after serving just 35 days in his post.

Lee’s Seoul Central District Prosecutors’ Office is the largest district prosecutors’ office in the nation and usually covers the most headline-grabbing cases within the elite investigative body.

The main opposition Liberty Korea Party (LKP) castigated the Moon administration for “exonerating itself” by pushing through a “barbarous reshuffle to avoid investigations” from prosecutors. On Sunday, LKP Rep. Joo Kwang-deok held a press briefing at the National Assembly in western Seoul to accuse Lee of sending text messages to his senior colleagues on the night of Jan. 7, a day before the Justice Ministry was about to announce the reshuffle, mocking their planned demotions.

Joo did not disclose Lee’s text message in detail but said the recipients were “deeply pained” by Lee.

The Justice Ministry adamantly denied the accusation Monday and released the full contents of Lee’s text message to the media, denouncing Joo for spreading lies.

In the text message, Lee was shown to have told an unidentified figure, “Thank you for always helping [me] with your kind words and love. Despite difficult times, I was able to come this far thanks to your endless concern and help, and I appreciate that. Thank you very, very much. It’s late. I pray that you spend a peaceful and restful time. I always thank you.”