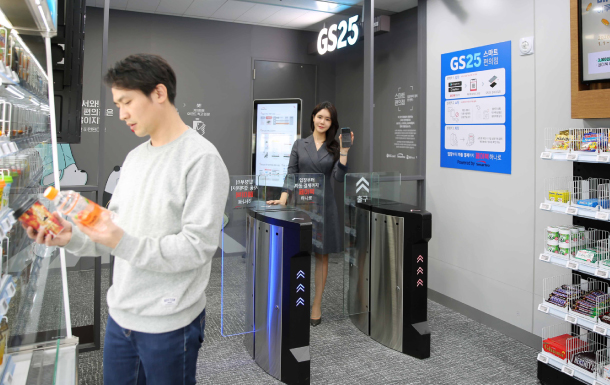 A newly-opened GS25 convenience store in central Seoul. It is a cashier-less store without a payment counter.[GS RETAIL]

GS Retail opened a cashier-less GS25 convenience store on Tuesday, aiming to follow in the footsteps of the Amazon Go store.

Visitors enter the store in Euljiro, central Seoul, which allow a QR code to be scanned from their smartphones. Payment is automatically made via the phone when they exit the store.

The technology was put together with BC Card and KT’s electronic banking service provider Smartro.

In 2018, GS Retail opened an unmanned GS25 in Magok-dong, western Seoul, where a facial recognition system and smart scanner were adopted. They are used in the Euljiro store too, but it doesn’t have a payment counter.

Only users of BC’s payment system, BC Paybooc, can get a QR code to enter the store. There are 8 million BC Paybooc users.

Once a customer enters, he or she will be monitored by more than 30 “smart” cameras.

Weight sensors are able to confirm how many products a consumer buys. When they exit, they are charged for any goods taken outside the store. A mobile receipt is given.

The GS25 also adopted image recognition technology to improve services like offering welcome greetings. Through that function, GS25 plans to give customers advice on purchases and inform them of discounts.

GS Retail plans to expand such stores nationwide. Stores that don’t operate at night and those that need improvement in operational efficiencies will be the first to be transformed.

“Attempts at digital transformation utilizing AI and deep learning are being made rapidly in different industries,” said a spokesperson for GS25. “This will help owners more efficiently run their stores and offer new digital shopping experiences to consumers that go beyond simply demonstrating cutting-edge technologies.”

Emart24 last year opened an unmanned convenience store without a payment counter. Its users similarly have to download the SSG Pay application to be able to enter the store. It is located in Gimpo, Gyeonggi.

The new GS25 is located on the 20th floor of the BC Card headquarters.