North Korea’s strategy shift to ‘wipe out’ the South

North Korea’s strategy shift to ‘wipe out’ the South 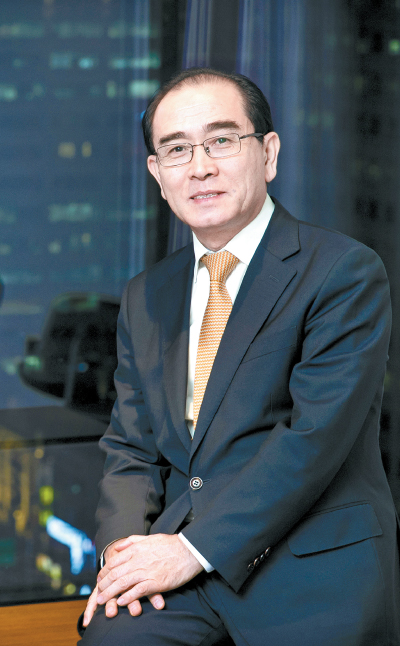 Thae Yong-ho, former North Korean deputy ambassador to London who defected from North Korea to South Korea in 2016, is interviewed by the JoongAng Ilbo in Seoul on Dec. 27. [JANG JIN-YOUNG]

2020 had a rocky start for North Korea. For the first time under the Kim Jong-un regime, the communist leader skipped his annual New Year’s address and announced his agenda for the new year on the heels of a plenary meeting of the North’s ruling Workers’ Party Central Committee held in the last week of December. The message was aggressive. Kim proclaimed North Korea had a “new strategic weapon” in store and that Pyongyang would engage in “shocking” actions until Washington drops its hostile policy toward the country.

With rising uncertainties surrounding North Korea, the JoongAng Ilbo met Thae Yong-ho, a former North Korean deputy ambassador to Britain and one of the highest-ranking defectors to emerge from the country, to hear his thoughts on Pyongyang’s nuclear strategy and the political landscape of Northeast Asia.

Q. Why did Kim skip his New Year’s speech?

A. In North Korea, a New Year’s address from the regime’s supreme leader is designed to provide hope to its people. But there was no good news to deliver, and that’s probably why he replaced the speech with a plenary meeting briefing.

Was there anything during the plenary meeting that caught your attention?

Kim Jong-un announced his plan to face off against Washington head-on. This policy will revive the North’s strategy of pursuing economic growth and nuclear development - the byungjin line - by resuming intercontinental ballistic missile (ICBM) tests that have been suspended since 2017. He also mentioned that Pyongyang would no longer be tied to its promise to disarm its nuclear weapons and stop proliferation. This is a very dangerous change in stance. We are starting to see images of ICBMs on North Korean television, and North Korea’s state media is calling the North Korea-U.S. relationship a confrontation between sanctions and self-reliance. Kim Jong-un also announced the country saw its largest harvest of rice (8 million tons) in history last year. I was surprised. It’s a bold statement to argue in front of South Korea and the United States that his country is abundant with food supplies. Kim also undertook a major reshuffle of the party leadership, with his sister Kim Yo-jong receiving a promotion. It seems she moved from being a vice director of the party’s Propaganda and Agitation Department to a first secretary of the Organization and Guidance Department. That position carries immense power.

Kim hinted at a new strategic weapon. What is your take on this?

I assume it’s a new strategic submarine topped with a nuclear-tipped submarine-launched ballistic missile (SLBM). North Korea released an image of Kim inspecting a new submarine at the country’s Sinpo naval base on July 23 last year. It’s a worrisome development. An SLBM is hard to detect and can fly far enough to reach the United States. However I doubt that the United States will react strongly. Since there were no missiles launched, the United States will not impose additional sanctions against Pyongyang. The relationship is likely to remain in a stalemate - just like last year - without any negotiations or compromises.

How do you think North Korea will react to this persistent deadlock?

Kim Jong-un once said that the United States plans to slowly exhaust and weaken his regime, and I think he nailed it. Washington is not as interested in North Korea as it used to be back in 2017. Three years ago, Americans considered North Korea as their biggest threat, but now it is placed at the bottom of the list. With this, U.S. President Donald Trump’s attention toward North Korea has already fizzled out. Trump will dumb down the threats from the North. When it tries to leverage a deal by revealing its submarine or even shooting an ICBM at Washington, Trump’s reaction will amount to: So what? This is why North Korea should not misjudge the situation.

Then how will the U.S.-North Korea relationship progress this year?

Kim says he will face the situation head-on, but I think he will try to hold out as much as possible with Chinese support backing him up until the U.S. presidential elections in November. Chinese President Xi Jinping will give Kim some breathing space by accepting foreign workers from North Korea and reviving the country’s tourism industry. It will be a tough year.

When do you think North Korea will engage in military threats again?

The watershed for a new round of threats will arrive between Kim Jong-il’s birthday on Feb. 16 and April 15 [North Korea’s Day of the Sun, founder Kim Il Sung’s birthday]. The United States and South Korea usually stage their Key Resolve combined military exercises during that period. Therefore, North Korea may stay quiet until the joint military drills begin, in order to push the allied forces to voluntarily cancel the event, and then start its threats around April 15. However, that day is also the day of South Korea’s general elections, so Kim may wait until the elections are over in order to ensure an advantage for the ruling Democratic Party, which is friendly toward the regime.

Are there any other dangerous signs?

North Korea revised its military strategy toward the South at a Central Military Commission expanded meeting on Dec. 21 from “invade and rule” to “wipe out.” This means it plans to reduce South Korea to rubble instead of trying to take over it.

Why would Kim choose such a strategy?

Since South Korea is a powerful country, Kim has assessed it would be impossible to take over. Instead he has decided to wipe it out. This is why North Korea focuses on conducting artillery drills and missile tests. The regime possesses rocket artillery systems designed to completely burn down a designated area. North Korea is heading in a dangerous direction. The South Korean military should come up with a counterplan.

Is there anything else that caught your attention?

Hierarchy is very important in North Korea, but if we look at photographs of participants at the expanded meeting of the Central Military Commission, Kim Rak-gyom - the head of the regime’s Strategic Rocket Forces - was sitting right next Kim Su-gil, a high-ranking general and the director of the General Political Bureau of the North Korean People’s Army. Kim Rak-gyom oversees the country’s nuclear weapons. He used to be ranked 10th in the military but was promoted to second this year, which is a sign that nuclear weapons now occupy an incredibly important position in North Korea’s military.

How should South Korea respond?

South Korea too has learned a lesson. Last year, almost 70 to 80 percent of audiences I addressed in my lectures thought Kim Jong-un would give up on nuclear weapons. Now, no one believes that. In my opinion it will be harder for the current liberal government to rely on its North Korea policy to earn votes.

Is there any possibility of another U.S.-North Korea summit before South Korea’s general elections?

Probably not. Kim laid a road map for a possible conflict with Washington at the plenary session meeting. The same goes for the United States. Trump told Kim at the Hanoi summit [in Vietnam] in February that the United States will lift sanctions only if North Korea denuclearizes at least five secret uranium enrichment facilities other than the Yongbyon nuclear complex. The United States will not back down from this stance.

Is there a possibility of North Korea threatening the South this year?

There is a very high possibility. In November, Kim Jong-un visited the Changrin Islet, located next to the western maritime border with South Korea known as the Northern Limit Line (NLL) in order to command a coastal artillery drill. It is a telling sign of a forthcoming provocation that a busy Kim Jong-un personally visited the NLL to command an artillery exercise. The South Korean government must send North Korea a strong signal that it won’t be fooled by such tricks.

Is the South Korean government unable to lift sanctions against the North or is it purposefully not lifting them?

There seems to be a rift within the Blue House between factions that support the United States’ lead on North Korea policy and those that advocate an autonomous policy by Seoul. Judging by how President Moon Jae-in flip-flops between appearing to lift sanctions and keeping them, it looks like he is trying to balance between the two factions. If the autonomous policy faction had had its way and lifted sanctions, that would have provoked the United States to impose a secondary boycott in the form of financial sanctions against South Korea. If Seoul wants to lift sanctions and engage in transactions with North Korea, it needs a bank. However, even if Moon ordered a local bank to open an account with North Korea, no bank would follow such an order. The bank would be at risk of collapse if the United States obtained such information. As you can see, it is extremely difficult to lift sanctions.

Some people wonder why South Korea needs an intelligence-sharing pact known as the General Security of Military Information Agreement (Gsomia) with Japan when it already has Washington as its ally. What is your view?

Cooperation between South Korea and Japan is very important as an extension of the South Korea-U.S. alliance. The United States was more proactive than Japan in stopping South Korea from withdrawing from Gsomia. In light of such developments, some people said South Korea should no longer be a subordinate to the United States, but this is an unrealistic argument. A country like South Korea that is surrounded by great powers should side with powerful overseas allies that can protect it. The Joseon Dynasty [1392-1910] lacked such an ally, and that’s why Japan took over the country. Now, for the first time in its history, South Korea has alleviated security concerns due to its alliance with the United States. Can Seoul protect itself if America leaves? Even the developed countries of Europe rely on the United States to keep Russia in check. We should not shake up our national security with unrealistic expectations.

Relations between South Korea and China are also difficult at the moment. How can this be resolved?

Is there any possibility of a civil uprising in North Korea?

Kim Jong-un’s answer to the nation’s difficulties was a horse ride atop Mount Paektu. Instead of coming up with rational policies, his message to the people was to stay strong. Does this make sense? Civilians are the only ones suffering here. As frustration builds up, there will certainly be an uprising within at least 10 or 20 years. Kim Jong-un has been frequently shifting out his top brass lately. No chief of the general staff of the North’s military has lasted a year. This shows how nervous Kim is.