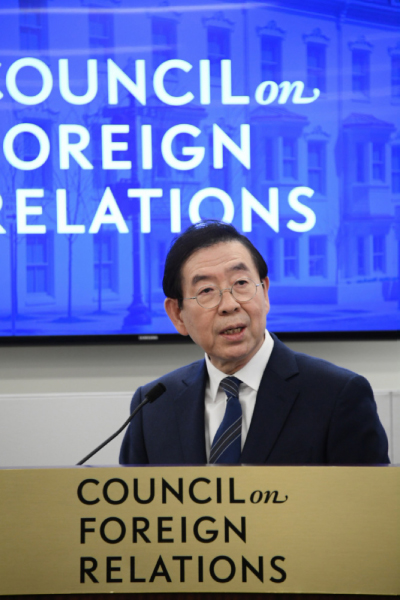 Seoul Mayor Park Won-soon touts his city’s efforts to improve inter-Korean ties in Washington on Monday during a roundtable discussion at the Council on Foreign Relations. [SEOUL METROPOLITAN GOVERNMENT]

Seoul Mayor Park Won-soon urged both Koreas and the United States to halt all military exercises till the end of the 2022 Beijing Winter Olympics to create a peaceful atmosphere on the Korean Peninsula and pave the way for a successful joint hosting of the 2032 Summer Olympics between the South and North.

Park made the remarks Monday in Washington, the last stop of his three-leg tour around the United States, during a speech at a roundtable discussion hosted by the Council on Foreign Relations, an American think tank.

“Last year, [South Korean] President Moon [Jae-in] and [North Korean leader] Chairman Kim [Jong-un] agreed to jointly host a 2032 Olympic Games. […] However, there are many challenges that lie ahead. […] To realize a [joint] 2032 Olympic Games, a peaceful atmosphere on the Korean Peninsula and in Northeast Asia must be created now.”

Park continued, “In order to make sure that the 2020 Olympic Games hosted by Tokyo this year in July is successful, I suggest that beginning now, until the end of the 2022 Beijing Olympic Games, any acts of hostilities that escalate the tensions on the Korean Peninsula including military exercises of North Korea, South Korea and the United States be temporarily halted.”

During his speech, Park also asked the U.S. government to ease sanctions on the North that restrict people-to-people exchanges, saying “sanctions for the sake of sanctions may not be very wise.”

“Now is the time to be more strategic in imposing sanctions, so that it can urge real changes and the right changes in the North,” said Park.

Park recalled his city’s failed experience last year of trying to donate $1 million to the United Nations’ World Food Programme (WFP) for North Korean humanitarian aid. The Seoul Metropolitan Government attempted to wire cash to the WFP’s bank account, but was “denied” by “related banks,” he said, due to “worries regarding the U.S. sanctions against the North and secondary boycotts.”

To promote peace on the Korean Peninsula, the mayor said his city was planning to host the so-called Seoul Peace Week this October and organize various peace-themed events, including the 2020 World Summit of Nobel Peace Laureates in Seoul, which is expected to invite Nobel Peace Prize laureates and scholars from across the world to share their thoughts on ways to establish peace on the peninsula.

Other projects include a reenactment of the 1985 Live Aid concert held at Wembley Stadium in London. This year, Park said Seoul was aiming to host a similar benefit concert at the Sangam World Cup Stadium in Mapo District, western Seoul, to bring together “peace-lovers around the world to strengthen solidarity and cooperation.”

Since Jan. 7, Park has been on a tour in the United States to promote Seoul’s tech-savvy infrastructure and attract support for his peaceful overture to North Korea. Park is scheduled to return to Seoul Thursday. He also visited Las Vegas and San Francisco.