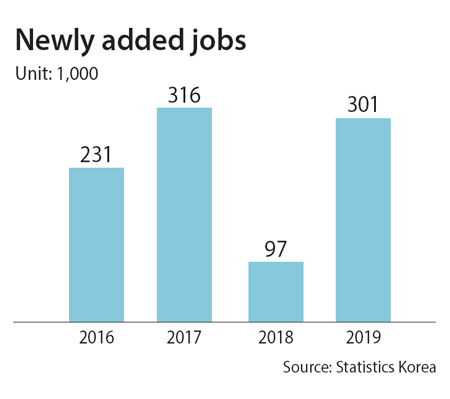 For the first time in two years, the number of new jobs exceeded 300,000 in 2019, prompting the government to congratulate itself and promise even more.

However, many of the new jobs were funded by the government for older workers in the less productive social welfare sector, raising big questions of sustainability and cost effectiveness. In addition, the decline in manufacturing jobs remains a major concern.

According to Statistics Korea, 301,000 jobs were created last year, bringing the total number of jobs in the country to 27.12 million. Not only was this a significant improvement from the 97,000 new jobs created in 2018, but it also exceeded the government’s target of 280,000.

The number of new jobs created in December was the largest in nearly five and a half years.

“Last year was the year of jobs rebounding as employment by numbers and quality have seen clear improvements as the job-centered national management achievements were realized,” Finance Minister Hong Nam-ki said during a minister-level meeting on Wednesday.

“We have succeeded in a ‘v shape’ rebound as all three job indices - an increase in the number of people employed, the employment rate and the number of unemployed - last year have improved.”

Hong emphasized an improvement in employment quality including wages and working hours.

He said the government will not be satisfied with improvements so far and will continue to push for more jobs.

“We will actively strengthen labor market policies and set up a sustainable employment infrastructure that factor in the changing industrial and economic environment,” Hong said. “For workers, we will provide new technology training that will strengthen the workers’ capacities.”

But not all is well on the employment front.

While new jobs created for older workers reached an all-time high, people in their 40s fared much worse, losing more than 160,000 jobs, the worst performance in that category in 28 years.

The government has been blaming a shrinking population for some job losses.

However, the number of jobs lost for people in their 40s was sharper than the shrinking population.

Hong admitted to problems with jobs for people in their 40s.

“The biggest regret is the sluggish job situation for people in their 40s and the manufacturing industry, which is our leading industry, despite the improvement [in overall] employment,” Hong said.

There are major questions about the sustainability and economic contribution of the jobs for older workers, as most are menial jobs such as crossing guards or gardeners.

The manufacturing industry lost 81,000 jobs compared to 2018, a 1.8 percent decline. Jobs in manufacturing have been shrinking for 21 consecutive months.

Even jobs in finance and insurance, which are considered high-quality jobs, were 40,000 fewer, a 4.7 percent decline.

Increases in the minimum wage have cost jobs in small businesses like restaurants.

Last year, the number of self-employed businesses with no additional employees totalled 4.06 million, 81,000 more than a year earlier, or a 2 percent increase. But small businesses with employees shrunk 6.9 percent to 1.53 million, a reduction of 114,000.

While the government expects 250,000 new jobs to be created this year - assuming that the economy expand 2.4 percent - private think tanks have less optimism.