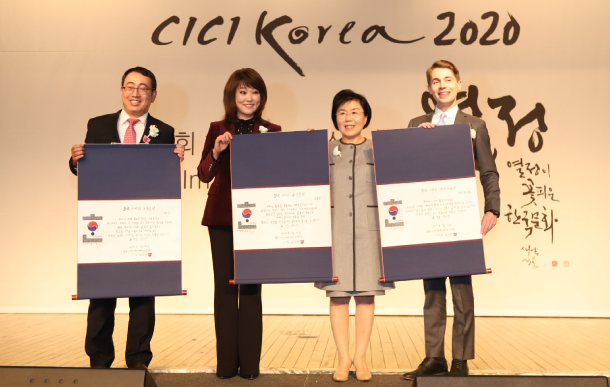 K-pop artists are more than idols, said Jeff Benjamin, the Billboard columnist famous for writing about BTS before it became a global sensation, on Tuesday during a press conference prior to the annual awards for cultural ambassadors of Korea hosted by the Corea Image Communication Institute (CICI) on Tuesday.

“I know that many artists are referred to as idols, and I almost feel like the word doesn’t emphasize that there is a lot of creative merit or leadership taken in their work,” Benjamin told a group of reporters at the InterContinental Seoul COEX Hotel in Samseong-dong, southern Seoul, on Tuesday.

“Because fans don’t just want to see their pretty faces and bright personalities,” he said. “If [the media outlets] dive deeper into something that connects more of the fans and artists, then I think they will gain more trust with what they have to say.”

CICI annually awards artists, experts and businesspeople around the world who have contributed to enhancing the image of Korea. This year’s awardees are Benjamin, jazz vocalist Nah Youn-sun and SK Telecom.

“Twenty years ago when I performed in small towns in France, little kids would come up after the performance to ask me if I was Pocahontas,” Nah said. “These days as I perform more than 100 times throughout the year in different cities and countries, the audience approaches me at the end of the performance with ‘annyeonghaseyeo [hello in Korean]’ and ‘gamsahamnida [thank you].’ The changes that I experience as a Korean artist have been phenomenal in the past couple of decades.”

The music industry of Korea has grown at a tremendous speed, Benjamin said, and will be competitive among teenagers in a digitalized age.

“At the start of the decade, the Korean [music] industry was not considered a large industry in the world,” he said. “But we saw in 2019 that Korea became the sixth-largest music industry in the world […] and it hasn’t just been K-pop. We have seen growing interest in other genres like K-jazz, K-rock, K-hip-hop, K-indie and K-dance.

“I really do think the Korean music scene is great for 2020, as we are in the digital age,” he added. “K-pop makes sure to create a moment of everything - whether it is the release schedule, with teasers, albums, music videos all coming out quickly. Given how easily distracted people are these days, the way K-pop releases and produces music is very important for how it’s consumed in the larger world industry.”

Benjamin is often dubbed in media as the writer who caught onto the magic of BTS early on.

“I don’t think anyone would have predicted the success of Psy or BTS, so I tell people that it’s anyone’s game,” he said when asked about whether he has his eyes on another boy band or girl group. “But there is a boy band that I am watching. That is Ateez. I think there is something special, and there has been a really strong western reaction to the group. I also really like (G)I-DLE.”

“SK Telecom was the first to commercialize 5G last year, and this year we will be working with companies like Byton in the future,” said SK Telecom’s Executive Vice President Yoo Young-sang.

CICI’s award ceremony was held in the evening at the InterContinental, with special performances by Nah and music group Verdiani and was attended by around 600 people, according to CICI, including ambassadors and members of conglomerates including CJ Group and SK Telecom. The event was supported by the Ministry of Foreign Affairs, the Ministry of Culture, Sports and Tourism and the Korean Culture and Information Service.

“It’s our 16th year of ceremony,” said Choi Jung-hwa, president of CICI. “I wish everyone a great year as they welcome the Year of the White Rat. May we all give it our best this year and reap success.”