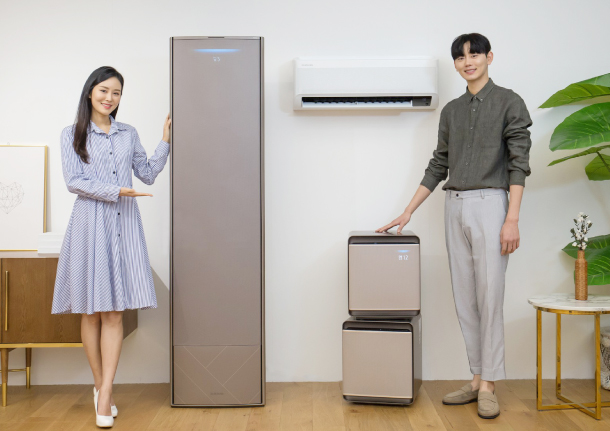 Samsung Electronics on Wednesday unveiled updates to several wind-free air-conditioners that include the use of its artificial intelligence platform and improved cleaning functions.

The updated wall-mounted air-conditioner has been topped with Samsung’s artificial intelligence platform Bixby, which enables users to control the device using their voice. Samsung said the update reflected consumer demand to communicate with household appliances.

“Similar to last year, around 2.4 million to 2.5 million units of air-conditioners are expected to be in demand this year,” said Lee Jae-hwan, Samsung Electronics vice president of the air-conditioner product marketing division, Wednesday at a press event held at Samsung’s research and development campus in southern Seoul.

With the goal to make art out of household appliances, Samsung offers nine different art panels that could be applied on the front panel of the floor-standing air-conditioner. The wall-mounted air-conditioner has been redesigned to be wider and slimmer than the previous model. An improved fan is able to drop the room temperature from 33 degrees Celsius (91.4 degrees Fahrenheit) to 25 degrees Celsius in 15 minutes, according to Samsung.

Samsung’s cube-shaped air-conditioners have also been updated with thicker dust-collecting filters and are able to turn on the air purifier function before the resident arrives home based on their location.

“Since Samsung first introduced wind-free air-conditioners in 2016, it has improved purifying functions and designs to rise as an essential household appliance throughout all seasons,” said Lee. “[Samsung] will contribute in making residential environments more refreshing.”