DP’s bigwigs zero in on races they want to win

DP’s bigwigs zero in on races they want to win 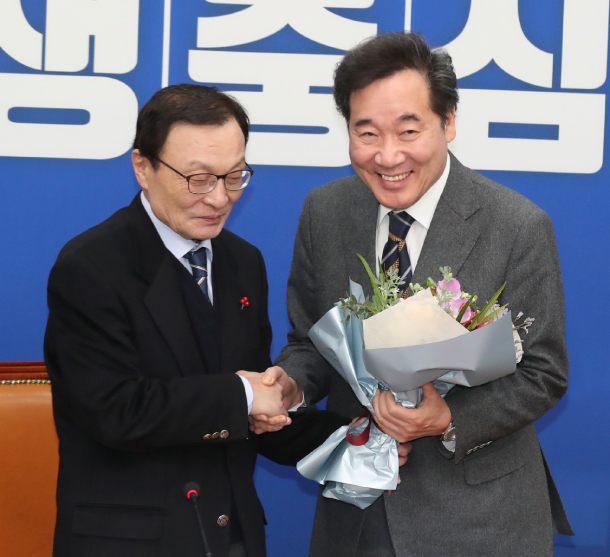 Lee Hae-chan, chairman of the ruling Democratic Party, left, welcomes Lee Nak-yon, the former prime minister who returned to the party on Wednesday, with a bouquet of flowers at a party Supreme Council meeting. [LIM HYUN-DONG]

Former Prime Minister Lee Nak-yon returned to the ruling party Wednesday to resume his career as a politician ahead of the April general election.

“It’s been six years since I left the party to work as governor and prime minister,” Lee said during a leadership meeting of the Democratic Party (DP). Chairman Lee Hae-chan of the party said the former prime minister will play an important role in the upcoming general election. Speculation is high that Lee will head the DP’s campaign committee.

He is also expected to run in central Seoul’s Jongno District. “It is true that I will soon move my residence to Jongno,” Lee said. “But [a nomination] is up to the party.”

Lee’s aides said they want a formidable opponent from the opposition Liberty Korea Party (LKP), possibly its Chairman Hwang Kyo-ahn. Hwang has said he will run in a tough district in the capital region but has not elaborated.

“There are 253 constituencies nationwide,” said a Lee aide. “If Hwang is not running against Lee, it will be reduced to just one of the 253 races. We want Hwang to compete against Lee.”

Lee, the first prime minister of the Moon Jae-in administration, formally left the post Tuesday. He served for two years and eight months, the longest-serving prime minister since the country established its current political system in 1987.

DP Chairman Lee promised during the leadership meeting that the election nomination process will be fair and transparent based on the party’s constitution and regulations. “Many talented people from various fields are rushing to join the DP,” he said. “Not only those recruited by us, many people with great experiences in the government and other areas are joining us.”

Lee said there will be no favoritism in the nomination process. “There will be no special treatment or discrimination in any case,” he said. “According to the nomination rules, winning a primary is the fundamental principle to winning a candidacy. We will make strategic nominations only when there are enough reasons and grounds to convince the people and the party members.”

According to Lee, primaries are planned for over 200 districts, indicating that the party will keep the number of so-called strategic nominations - made by the party leadership rather than by any grassroots process - to a minimum.

Today is the deadline for the civil servants to step down to run in the April 15 general election, and senior officials of the Blue House announced their resignations.

Also joining the DP on Wednesday were Yuk Dong-han, chairman of the board of the National Institute for Lifelong Education; Han Gyeong-ho, board chairman of the Public Officials Benefit Association; and Han Myung-jin, former vice minister of the Defense Acquisition Program Administration.

Rep. Kim Boo-kyum of the DP, currently representing Suseong A District in Daegu, reportedly asked Vice Minister of Finance Koo Yun-cheol to run in Buk A District in Daegu. Koo, however, had not turned in his resignation as of Wednesday.

“We need to wait until tomorrow,” Kim told the JoongAng Ilbo on Wednesday. “It seems many of his associates are discouraging him.”

DP sources said the party asked Foreign Minister Kang Kyung-wha and Defense Minister Jeong Kyeong-doo to run in the election, but they both rejected the offers.

Kang was offered a nomination in Gwangjin B District in Seoul, the current district of Justice Minister Choo Mi-ae, or Seocho A District, currently occupied by Rep. Lee Hye-hoon of the New Conservative Party, but she refused, sources said.

Jeong was encouraged to run in his hometown of Jinju, South Gyeongsang, but said no.

Speculation was high that former Deputy Prime Minister of Economy Kim Dong-yeon will run in Cheongju of North Chungcheong, but a DP lawmaker close to him told the JoongAng Ilbo that Kim won’t run.

As of now, 11 DP lawmakers have publicly promised that they won’t seek re-election. National Assembly Speaker Moon Hee-sang, currently independent, and Prime Minister Chung are also expected to retire, so the DP will have 13 vacant districts.

A controversial police leader, Hwang Un-ha, also declared a bid, requesting the police agency on Wednesday to dismiss him.

Hwang, former chief of the Ulsan Metropolitan Police Agency, is a suspect in an investigation of the Blue House’s alleged abuse of power to influence the 2018 Ulsan mayoral election. Hwang was accused of having taken orders from presidential aides to investigate then-Ulsan Mayor Kim Gi-hyeon over a corruption scandal on the eve of the 2018 election to help a Moon ally, Song Cheol-ho, win the race.

Hwang’s request for early retirement was denied last year because an official under criminal investigation cannot resign. Hwang, therefore, submitted a request for dismissal at his own request.