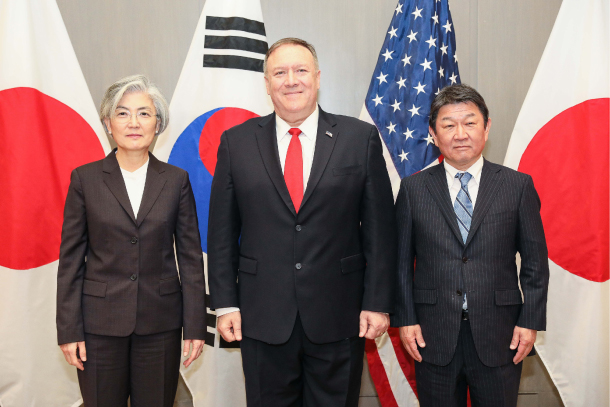 South Korean Foreign Minister Kang Kyung-wha held talks with her American and Japanese counterparts on tricky issues such as stalled denuclearization negotiations with North Korea and tensions in the Middle East on Tuesday in California.

Kang held three-way talks with U.S. Secretary of State Mike Pompeo and Japanese Foreign Minister Toshimitsu Motegi at the Four Seasons Hotel Silicon Valley in Palo Alto amid an escalation of tensions between the United States and Iran and also had separate talks with each diplomat about various bilateral matters.

Seoul has been reviewing various options to contribute to U.S.-led security operations in the Middle East, including the deployment of Korean troops to the Strait of Hormuz, a sensitive issue taking into consideration Korea’s alliance with the United States and efforts to maintain diplomatic ties and business ties in the region. The South Korean government has also been trying to take the initiative to help move along U.S.-North talks after Pyongyang revealed it will take a different path.

In the trilateral talks, the diplomats exchanged opinions on how their countries could cooperate on regional issues and the situation in the Middle East, according to the Korean Foreign Ministry in a statement Wednesday. They stressed the importance of cooperation and diplomatic efforts of the three countries for “substantive progress in the North Korean denuclearization issue.”

They further shared concerns over the tensions in the Middle East and agreed to consider ways to strengthen communication and cooperation between the three countries, including the sharing of information, according to the ministry.

The top diplomats of Seoul, Washington and Tokyo last met in August at the Asean Regional Forum in Bangkok. Kang and Pompeo last held bilateral talks in March 2019.

The U.S. State Department after the three-way meeting in a statement said the diplomats “emphasized the importance of the U.S.-ROK and U.S.-Japan Alliances to security and prosperity in the Indo-Pacific region and the world.” It added the diplomats stressed that “trilateral cooperation is essential to ensure the future of peace in the region.”

The State Department likewise said in a statement that Kang and Pompeo in their bilateral talks discussed the “importance” of trilateral cooperation with Tokyo “and pledged to continue to work closely together on an array of regional and global issues.”

They also “reaffirmed continued close U.S.-[Republic of Korea] coordination on North Korea” and “reiterated their commitment to cooperation across the U.S. Indo-Pacific Strategy and the [South Korean] New Southern Policy.”

Pompeo called for collective efforts to safeguard the Strait of Hormuz and contribute to the stability of the Middle East, a South Korean official told reporters after the bilateral talks.

Pompeo’s remarks are seen as encouraging Seoul to deploy Korean troops to partake in the U.S.-led coalition in the Strait of Hormuz, the strategic waterway located between the Persian Gulf and the Gulf of Oman through which more than 70 percent of Korea’s crude oil supply passes.

Kang was said to have told Pompeo that the stability of the Middle East region is very important to Korea since a large volume of its oil supply passes through the Strait of Hormuz, and that Korea’s priority is the protection of its citizens’ lives and assets and the businesses in the region, according to the official.

She was also said to have relayed that Seoul is “currently reviewing multiple angles to contribute to international efforts toward the stability of the region,” added the official.

Kang told reporters after the meeting that the United States’ basic position is that all countries with an “economic stake” in the Strait of Hormuz should contribute to the safeguarding efforts, and sees that Korea should also have “great interest and contribute” as it is dependent on the region because the majority of its crude oil imports pass through the strait.

But she noted that “a decision has to be reached taking into consideration the safety of our people and businesses in the region and relations with Iran” and that discussions within the Korean government and the National Security Council will continue.

On Tuesday, President Moon Jae-in in a press conference at the Blue House in Seoul said that improvement in inter-Korean ties can’t wait for progress in denuclearization talks between North Korea and the United States. He added that Seoul needs to take more initiative to improve relations between Pyongyang and indicated that allowing South Korean tourists to visit the North could help ease tensions without infringing upon international sanctions.

“Depending on the point in time, North Korea-U.S. talks can make speed first, or the South-North can go first,” said Kang.

Kang also told reporters that there are inter-Korean projects that “are not subject to sanctions or can be exempted.” She added that she had various discussions with Pompeo on this, and that Washington also understands Seoul’s intentions and wishes.

She said that as North Korea and the United States are not currently making progress, “We believe it is important to have South-North dialogue and maintain the momentum for North Korea’s engagement.”

In the larger picture, she pointed out that “North-U.S. and South-North talks need to be complementary to each other and form a virtuous cycle.”

In separate bilateral talks the same day, Kang and Motegi discussed the forced labor compensation issue and export restriction measures, according to the Korean Foreign Ministry.

Kang demanded the withdrawal of Japan’s implementation of export restrictions and removal of Korea from its so-called white list of trusted trading partners last July and August. The measures are seen as retaliation against the Korean Supreme Court rulings calling for Japanese companies’ compensation of Korean forced labor victims in 2018.

Seoul announced in August that it planned to terminate its bilateral General Security of Military Information Agreement (Gsomia) with Tokyo but decided in November to conditionally keep the intelligence-sharing pact. Washington sees Gsomia as being symbolic of trilateral security cooperation. Seoul and Tokyo have been trying to bolster dialogue to mend frayed relations since.

The Korean Foreign Ministry also announced that Lee Do-hoon, Seoul’s special representative for Korean Peninsula peace and security affairs, will visit Washington from Tuesday to Saturday, for talks with Stephen Biegun, the U.S. deputy secretary of state and special representative for North Korea. South Korea and the United States also are working to renew their bilateral defense cost-sharing deal, and another round of talks on the matter took place in Washington on Tuesday and Wednesday.