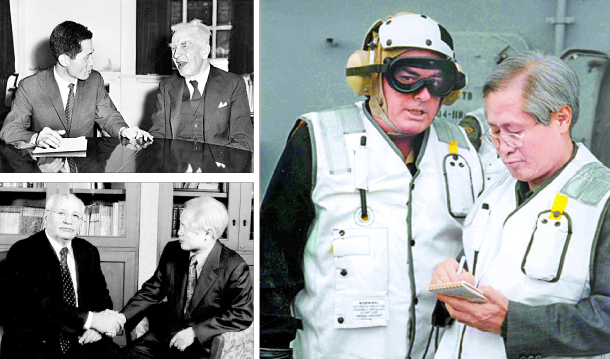 Kim Young-hie, former editor at large of the JoongAng Ilbo, died Wednesday at the age of 83. Counterclockwise from right: Kim, right, who was active as a journalist for 62 years, reporting at the Yokosuka naval base in Japan in 1997. Kim, left, interviewing historian Arnold Toynbee for an article in the inaugural edition of the JoongAng Ilbo in 1965. In 2001, Kim interviewing former Soviet leader Mikhail Gorbachev. [JOONGANG ILBO]

Kim Young-hie, former editor at large of the JoongAng Ilbo, died Wednesday. He was 83.

Kim was active as a journalist for 62 years. He was a seasoned columnist with special expertise in international affairs, renowned interviewer and a mentor of many reporters in Korea.

Even after his retirement from the newspaper in 2017, Kim never stopped writing. His last column in the JoongAng Ilbo appeared on Sept. 12, 2019. The translated version, “Alliance in transition,” was published in the JoongAng Daily four days later.

After graduating from high school, Kim started his career as a journalist with the Hankook Ilbo in 1958. He was particularly renowned for his command of English when that was rare among Korean journalists. He traced his love affair with the language to the Swedish Medical Assistance Hospital in Busan, where he received medical treatment as a teen.

Older Koreans remembered Kim for his exclusive report on the assassination of U.S. President John F. Kennedy at a time when the world was far less connected. While working a nighttime shift in Seoul on Nov. 23, 1963, he spotted the news coming in over a teletype machine in an English-language news service dispatch. “I wrote the front page straight news story and profile alone,” Kim recalled. “It was a perfect exclusive.”

In July 1965, Kim joined the JoongAng Ilbo as a member of its original staff. His interview with Arnold Toynbee, a British historian and a celebrated philosopher, was published in the newspaper’s founding edition on Sept. 22, 1965, and thereafter he stood out as a reporter specializing in international affairs.

In 1970, Kim was promoted as editor of the foreign news department. He was 33 years old. The next year, he was made the Washington correspondent and served in that post for seven years. In November 1983, Kim became editor in chief of the JoongAng Ilbo.

He later served in other management posts at the JoongAng Ilbo including vice president. In 1991, he was named managing director of Newsweek Korea.

In March 1995, Kim returned to the JoongAng Ilbo as editor at large specializing in international affairs. From June 1998, he contributed a weekly column and became one of the country’s most influential columnists. “Arguments must be backed up, and criticism must present an alternative,” Kim used to say. Throughout his career, he made it a point to meet the widest range of people to offer him opinions, facts and perspective.

From 2000 to 2001, Kim also oversaw the launch and initial operation of the Korea JoongAng Daily.

Reporters decades younger than Kim felt free asking for help with articles because of his warmth and generosity. He became proud of a late nickname: the Oldest Reporter in the Newsroom.

He was an unreserved critic of the country’s foreign policy and policy toward North Korea, and administrations often sought his advice at times of diplomatic crises. Pragmatism and national interests were his touchstones.

Kim also tirelessly explored the topics of denuclearization of North Korea and unification. Diplomats, even when they did not agree with his ideas, respected him as a thinker.

Kim was also a famed interviewer, known for his sharp, concise questions.

Kim claimed his role model was American reporter and commentator Walter Lippmann. Today, he is a role model for many Korean reporters. “If I were to relive my life, I would not hesitate to choose a reporter’s life,” Kim said just a few days before his death.

Kim is the author of “Koreans in Washington; Koreagate Scandal and Korea-American Relations,” “Perestroika Journey in the Soviet Union” and “Machiavelli’s Advice.” He also wrote the novel “Hamel.”

He is survived by his wife and two children.

The mourning ceremony is being held at Samsung Medical Center in southern Seoul. Kim’s funeral procession will start at 7:30 a.m. on Saturday.