Citing sources familiar with the North, South Korea’s Yonhap News Agency on Sunday said foreign embassies in Pyongyang received a notice near the end of last week that Ri Yong-ho was being replaced as foreign minister by Ri Son-gwon, chairman of the North’s Committee for the Peaceful Reunification of the Country (CPRC). 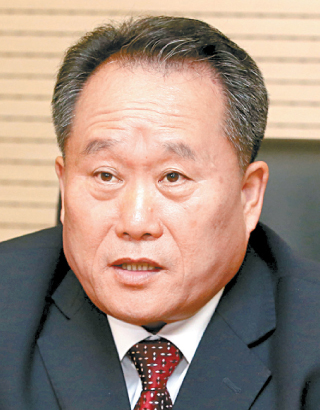 NK News, a news outlet focusing on North Korea, reported on Saturday that Ri Son-gwon had been chosen as the country’s top diplomat to head its negotiations with Washington, which are deadlocked over the question of sanctions relief.

Since Ri served as the head of the CPRC, one of the state agencies in charge of South Korean affairs that is roughly equivalent to Seoul’s Ministry of Unification, his appointment stands out as a rare occasion in which an official specializing in inter-Korean affairs is placed to lead the Foreign Ministry.

A South Korean government official on Sunday said Seoul was working to verify the reports. According to multiple other North Korea-related sources, the appointment was also alerted to North Korean diplomats serving overseas and may be formalized in an official foreign affairs meeting in Pyongyang within the next few days.

On Saturday, North Korea’s Ambassador to China Ji Jae-ryong and Ambassador to the United Nations Kim Song were spotted in Beijing boarding a flight to Pyongyang aboard state carrier Koryo Airlines. They were with other diplomats such as the ambassadors to Angola and Singapore. The North usually holds a meeting of its overseas diplomatic mission chiefs in the summer - a meeting that may have been moved forward.

Given his prominent role in inter-Korean relations, Ri is well-known in the South for his forceful personality and controversial remarks seemingly intended to induce surprise in his counterparts.

During the third inter-Korean summit between South Korean President Moon Jae-in and North Korean leader Kim Jong-un held in Pyongyang in September 2018, Ri scolded executives of Samsung, SK and LG over a lunch of Pyongyang-style naengmyeon, suggesting they were too comfortable and not demonstrating much interest in inter-Korean economic projects.

At other events, Ri made fun of a South Korean ruling party lawmaker for having a potbelly and then-South Korean Unification Minister Cho Myoung-gyon for being slightly late to their meeting - remarks that many in Seoul regarded as diplomatic faux pas.

A former senior colonel in the Army and right-hand man to Kim Yong-chol, a North Korean spymaster who formerly headed the country’s United Front Department, Ri was believed to have been punished alongside Kim for the failure of the second North Korea-U.S. summit in Hanoi, Vietnam, in February 2019. They were conspicuously absent from official events for several months.

Both figures later emerged in official capacities, with Ri being spotted prominently at a recent ruling Workers’ Party plenary meeting late last month, in which leader Kim Jong-un announced a major policy shift with regard to the United States.

If true, the ouster of Ri Yong-ho as foreign minister - a post he had occupied since 2016 - carries significance given his role in the nuclear negotiations as a diplomat experienced in dealing with the United States. According to a former South Korean official, the shift in leadership reflects Kim Jong-un’s move to a hard-line direction by appointing a figure with a military background and a tough attitude toward South Korea.

The move also follows what are believed to be major personnel changes in leadership positions of the North’s ruling Workers’ Party at its plenary meeting last year.

A state media report announcing a list of 70 figures on a funeral committee for an independence fighter who died recently failed to mention five top party figures, like former Foreign Minister Ri Su-yong, party munitions chief Thae Jong-su or propaganda chief Pak Kwang-ho, suggesting they had been removed as members of the party’s Central Committee.