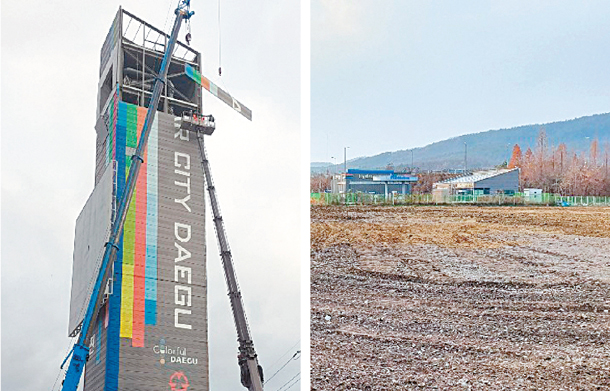 Left, the 46-meter-tall solar power tower in Sobyeon-dong, Buk District, in Daegu, built in 2011 that cost 11.6 billion won (＄10 million) is being demolished in December. Right, after the demolishment. [DAEGU METROPOLITAN CITY]

The country’s first solar power tower was built by Daesung Energy and the Daegu Metropolitan City in 2011 under the Lee Myung-bak administration, which promoted a low-carbon, green growth strategy.

The Daegu city government, aspiring to become a leading solar city, provided 20,300 square meters (218,507 square feet) of land to build the tower in the city’s Buk District. It was meant to be a solar power plant and employed 450 heliostats, reflective mirror panels that concentrate sunlight on the top of the tower. The concentrated solar energy was supposed to reach up to 1,000 degrees Celsius (1,832 degrees Fahrenheit) and drive turbines to produce energy of up to 200 kilowatts per hour, enough for 80 households.

Of the 11.6-billion-won budget to build the tower, 7.15 billion won came from the Korean Energy Technology Evaluation and Planning (Ketep), a state-run institute under the Ministry of Trade, Industry and Energy, while Daesung invested some 4.5 billion won.

But the solar plant, after being plagued by many problems over the years and unimpressive research results, has been reduced to rubble.

Daegu’s city government disclosed Wednesday that Daesung Energy demolished the tower last month, spending around 200 million won to do so.

The tower never delivered on any of its promises.

Daesung Energy, a city gas subsidiary of Daesung Group, formed a consortium to take part in a renewable energy project with Ketep in 2011. The project was supposed to research and develop technology to convert thermal power into electricity over a five-year period. It was expected to commercialize local technology that could be exported to energy markets around the world. The Daegu tower was its main project.

Between 2008 and 2013, Korea’s central government was pushing “green growth” and development of renewable energy. The project in Daegu fit right into those aspirations.

However, the tower did not come anywhere near expectations. Instead of generating 200 kilowatts per hour, it could only produce 20 to 50 kilowatts.

There were expectations that the solar technology could be exported, but obviously there was little to export.

In October 2013, the tower actually caught on fire during the Daegu World Energy Congress. It was later determined that excessive heat was produced by the heliostats.

Eventually, the Daegu city government and Daesung Energy concluded the best route forward was to make pretend they never tried - and to demolish the solar power tower in December.

A Daegu city official said, “From the beginning, it was a research facility to carry out a state institute’s projects, and that research period has ended, so we are scrapping the facility which no long has any use.”

A Daesung Energy spokesperson said the consortium led by the company returned some 2 billion won in research funds to the government and that “from the beginning, the solar tower was not a facility to produce energy but a facility for research purposes.”

He added, “The research was conducted, but the export and business aspects were regrettable.”