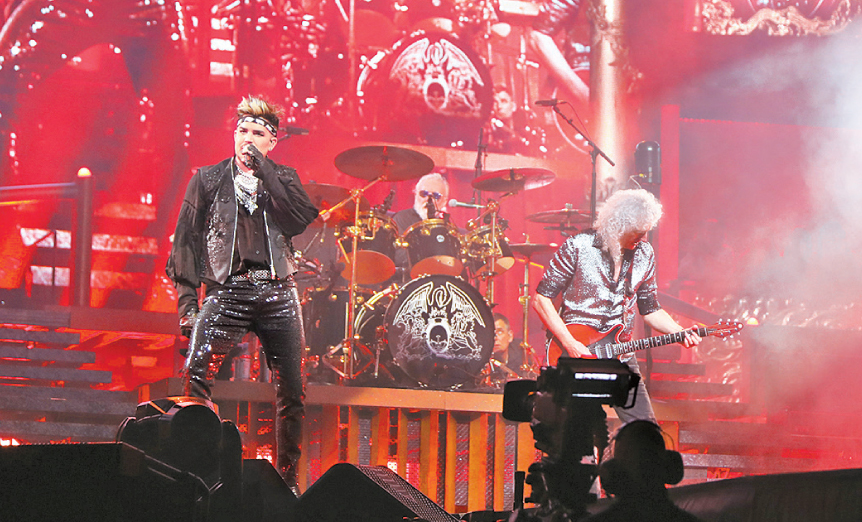 When Freddie Mercury tells Mary Austin that he is gay against the bittersweet notes of “Love Of My Life,” when all members of Queen spent their summer completing their outrageously spectacular “Bohemian Rhapsody” and when the audience truly became one with the band stomping their feet along to “We Will Rock You,” it all resonated with the hearts of audience members of the movie “Bohemian Rhapsody” last year.

And before the eyes and ears of 23,000 audience members on Saturday and Sunday at the Gocheok Sky Dome stadium, western Seoul, those songs once again resonated and came alive at the “Super Concert 25 QUEEN.”

Because I was born in a generation where the beats of first-generation K-pop dance tracks were the thing, Queen’s music had only been played on long-distance car rides via my parent’s playlists on their CDs, during most of which I had failed to stay awake. Having only scarce - if any - knowledge of the band or just how popular Queen’s hits actually were, “Bohemian Rhapsody” was a chance to truly get to know the band and its music, not only for me, but for anyone born after its heyday. To think that those very people depicted in the movie were playing live on stage, it almost felt surreal.

Most of the 23,000 people at the stadium seemed quite young and in the same boat as me in the sense that we were newfound fans of Queen. In fact, 73 percent of the tickets were sold to those in their 20s and 30s, more female than male according to Hyundai Card, the official sponsor of the concert. Queen’s Seoul concert, the first solo Korean concert since Queen came together 50 years ago, was the 25th edition of Hyundai Card’s renowned “Super Concert” series, as well as “The Rhapsody Tour” that Queen began after the humongous success of the 2018 film based on its career. Some of the biggest names in the music scene have visited Korea as a part of “Super Concert,” including Beyonce, Billy Joel, Green Day, Usher, Eminem, Coldplay, Sam Smith and Kendrick Lamar.

Two of the original members of the band, Brian May and Roger Taylor, along with new frontman Adam Lambert opened Sunday’s concert with “Now I’m Here,” 10 minutes late than its scheduled time of 6 p.m., due to heavy traffic caused by concertgoers. Lambert has been filling in for Freddie Mercury, who passed away in 1991, for the last 8 years, while bassist John Deacon quit the band in 1994.

The delay to the start of the concert had no effect on the mood as the energy from the stage and the audience was electric with everyone clapping along and stamping their feet to the pounding rhythm of “Keep Yourself Alive,” “Hammer to Fall” and “Killer Queen.”

“Are you having fun?” shouted Lambert. “Thank you for welcoming us with so much love in Korea. Seoul has soul!”

“I have a little question. Do you love Freddie Mercury? Me too! So tonight, let you and me celebrate Freddie together, yeah? It goes a little something like this,” Lambert said before launching into one of the band’s biggest hits, “Don’t Stop Me Now.”

When the set list arrived at “I’m In Love With My Car,” Lambert stepped down from the stage, and Taylor took the microphone to sing his song, sporting the solo session with full energy. May supported him with his guitar, the two legends playing against a black-and-white background video that rewound to the time of its apex. Lambert took the stage again for “Bicycle Race,” “Another One Bites the Dust” and “I Want It All.”

“Annyeong! Annyeonghaseyo! Annyeonghaseyo Seoul!” May said, shouting his excited hellos to the audience in Korean. He took a seat at the end of the stage on his own with his classic guitar.

“You know, I really love you guys. You’re amazing. I really, really love you. I’ve never seen anything quite beautiful as this. Saranghaeyo [I love you].”

May began “Love Of My Life,” as the crowd sang all the words back to him. Then in the last verse of the song, a video played showing Mercury singing the song, as if he were right next to May. May reached out his hand to hold Mercury’s in the video in a touching moment that showed Mercury still lives on in Queen. May finished his solo with “39,” and Taylor took over with his very own solo of “Doing Alright.” Lambert then joined them for “Crazy Little Thing Called Love” and “Under Pressure.”

The highlight of the concert was when the crowd became one with the band, clapping to “Radio Ga Ga” and “Bohemian Rhapsody” and reliving the last scene of the film where Mercury sang his heart out to fans at the Live Aid concert. To the heated call for an encore, a video was played in which Mercury shouted “Eh-oh!” to the crowd, and they took their queue to respond with their own “Eh-oh!” The three came back on stage for their last performances of “We Will Rock You” and “We Are The Champions,” with May wearing a Taegeukgi (Korean flag) T-shirt for the Korean fans.

Having learned about Queen through “Bohemian Rhapsody,” the concert felt bittersweet. Had I not seen the movie or the concert, then I would not have been enlightened on perhaps the greatest band to have ever existed. But to have learned of it decades after through a media portrayal felt like missing out on a major part of history that shaped the culture we know today. However, as the saying goes, it’s better late than never.

“It feels like a new world. This is amazing,” May said, before starting “39.” He explained that he wrote the song while imagining how new the world would seem if someone had traveled back from space to Earth, how amazing that would be and how this concert made him feel just like that spaceman - not only for him, but for a new younger generation whose eyes and ears have been opened to a new world of music.

“Gamsahamnida,” he said to the crowd thanking them in Korean. But truly, the thanks is all ours.